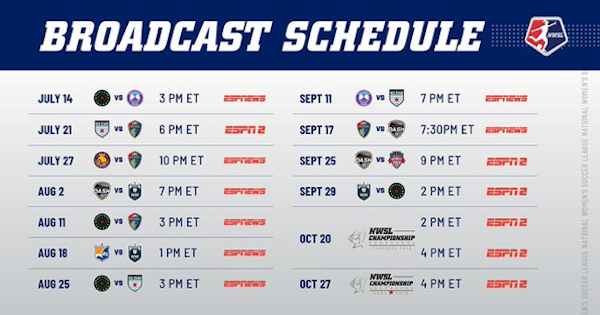 Without a television contract for the 2019 season, the National Women's Soccer League announced plans to televise 14 league matches during the 2019 season: eight on ESPNEWS and six -- including the two semifinals and the championship -- on ESPN2.

A commercial agreement the NWSL had with A+E was severed by the parties in February. It included a television deal one year remaining on a three-year broadcast agreement to air games on Lifetime.

The ESPN telecasts will begin on July 14 when the Portland Thorns, the league's highest-drawing team, will host the Orlando Pride. The NWSL matches are currently only available via streaming on Yahoo Sports as part of an agreement with Verizon.

NWSL teams are 10 games into their 24-game regular season. The end of the 2019 regular season was pushed back to October -- which gives ESPN plenty of time to air matches.

In 2015, a television deal was also announced in the middle of the World Cup. That agreement with Fox Sports was more modest -- six games in all on FS1 and four games streamed.