USWNT and women's soccer in the world 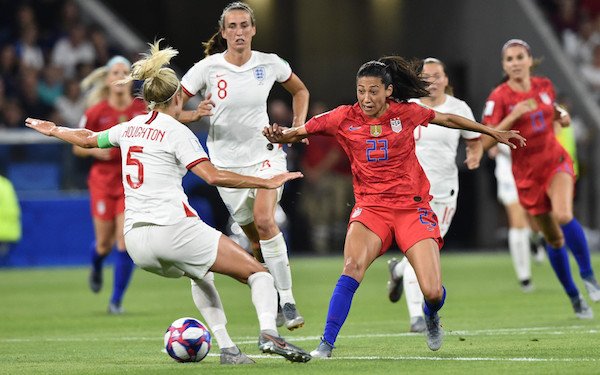 As I sat down to write this article, the USWNT played the semifinal against England and moved to the final. It was the eighth semifinal appearance of the USWNT in the Women’s World Cup. Actually the current WWC is the eighth version of the WWC. The USWNT won it three times (1991, 1999 and 2015) and never finished any WWC anything less than a third place. The USWNT has been ranked either first or second in the FIFA’s women’s rankings since the FIFA World Ranking's creation in 2003 and currently is ranked first.  It won the Gold medal four times (out of six tries) in the Olympics. There is undisputable dominance of women’s soccer by the USWNT.  The only NT in soccer one can compare to the dominance of the USWNT is Brazil in men’s soccer, but then its ranking fluctuated between 1 and 18 (2012) since the inception of rankings in 1993. Its dominance may be compared to the basketball Dream Teams of the USA; the Dream Teams have a slightly stronger dominance in men’s and women’s basketball compared to the USWNT’s dominance.

Before we discuss the semifinal and its implications I have a couple of observations from the WWC 2019:

Now, if you look closely at the semifinal game, you will see the pros and cons of the USWNT's performance in relation to the rest of the world. Without going to the individual details, the game can be summarized as follows: During the first 15 minutes of the game – like most other games – the USWNT had an excellent performance. After it restored the lead at the 31st minute, it tried to keep the score, which it managed to do so. After the 86th minute – when England started playing with 10 players – until the end the USWNT did everything to keep the score instead of trying to score a third goal. It put the ball to the corner area many times trying to kill time. The same was witnessed during the last minutes of the France game. I personally do not appreciate this approach and think that if the Basketball Dream Team was leading it would not try to run down the shot clock each time with a last second shot. Instead it would attack to score. One should not forget the incredible save by Alyssa Naeher in the first half, very poorly taken penalty kick by England – not a good save by Naeher – and a goal which was disallowed by inches. Overall and the games I watched (Spain and France) tell me that the USWNT has an incredible self-confidence, an outstanding team play and knows how to play knock-out games (or finals for that matter). For example, if the USWNT was trailing by 2-1 and had a penalty kick at the 84th minute, I am sure it would convert it.

Self-confidence comes through three avenues: institutional memory, experience and the playing together as a team. The facts I have summarized above – the performance of the USWNT in the World Cups, Olympics and FIFA rankings, the fact that it's the oldest team in the tournament (average of 28.5) and the fact that all players on the roster play in the NWSL are all manifestations of the three avenues I described above. On the other hand, the English WNT lost the game because it did not properly have any of the above mentioned three avenues of self-confidence. One cannot explain why it managed to miss three penalty kicks during the tournament other than lack of self-confidence. 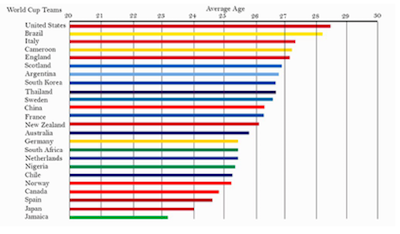 The USWNT’s dominance of the women’s soccer is not without a threat. In an earlier article, I have summarized the threats awaiting the USWNT in the future. Our women’s youth NTs are not doing as well as their senior counterparts. It is clear that the rest of the world is taking measures at the developmental level to narrow the gap. But still the fact that the USA has more registered players combined of Canada, Norway, Sweden, Germany, France and England and nearly as many as all of UEFA, plus the fact that women’s soccer has a longer history in this country – thanks to Title IX – will make it tougher for the others to catch up. Although quantity does not automatically lead to quality as evidenced by Croatia and Iceland in men’s soccer, quantity will help to create a soccer culture among women related to soccer which the rest of the world lacks.

When we talk of “the others” we have to realize a couple of facts: 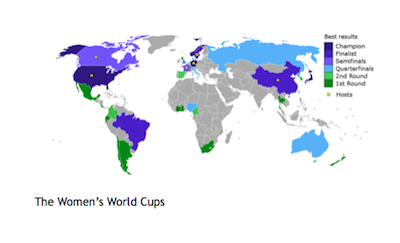 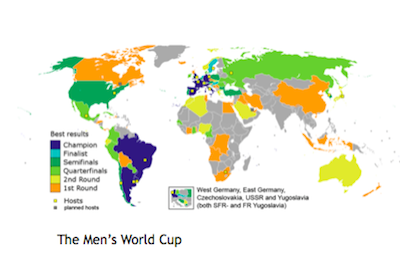 The women’s soccer has strong footprints in the USA, Canada, Brazil, Western Europe, Russia, Eastern Asia, Australia and New Zeeland and only in those countries and regions.

With facts of “others” known, it will take decades before the “others” catch up with men’s soccer in their own countries – at least in parity – and the USWNT. Let us not forget that USWNT might lose its level of dominance over the years to come if it sits in its comfort zone.

Ahmet Guvener (ahmet@ahmetguvener.com) is the former Secretary General and the Chief Soccer Officer of Turkish FA. He was also the Head of Refereeing for the Turkish FA. He served as Panel member for the FIFA Panel of Referee Instructors and UEFA Referee Convention. He now lives and works as a soccer consultant in Austin, TX.