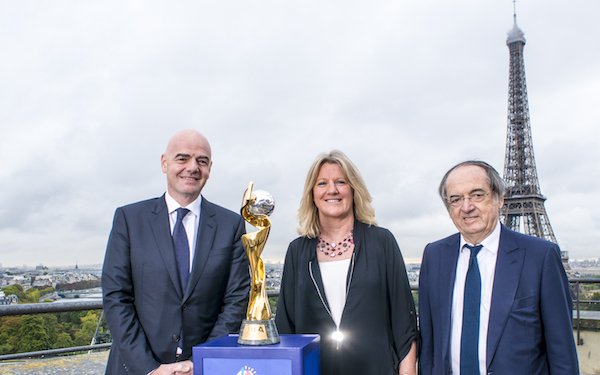 Two days before the end of the 2019 Women's World Cup, which has set television viewing records around the world, FIFA president Gianni Infantino made five proposals he wants to present to the FIFA Council to further grow the women's game.

"It's a great thing, this World Cup, but then people forget, they do other things," he said at a media conference in Lyon on Friday. "It's our job to make sure that they don't forget and we don't just say: 'See you in four years.' That's why I propose to the FIFA Council and to all our members -- who have to embrace the development of women's football."

ASAP, said Infantino. Increased investment by clubs in women's soccer is the single most important thing that can happen to develop the sport.

Organizing a Club World Cup for men has been difficult enough, though. A lot of questions exist on the women's side. How many teams would take part? How would they be selected? When would the tournament be held? Who would host the tournament? How would it draw?

Right now, only UEFA and Conmebol organize confederation championships for clubs. (The UEFA Women's Champions League is the single best club competition for women, drawing the top clubs from around Europe and increasing commercial interest.)

To get it rolling, FIFA will probably want to make the first tournament an invitational competition. The United States is the only country where women's soccer consistently draws at the club level, so one or more of the top-drawing NWSL teams -- Portland, Utah, North Carolina -- would make perfect hosts. Another possibility: co-hosting with Mexico, where Tigres (based in Monterrey) is the best-drawing club in the Liga MX Femenil.

A proposal was made in 2017 for a FIFA world league to be played in tournaments all over the world. It got pushback from UEFA, whose calendar is already full as the only confederation with a four-year cycle of events for women's national teams (qualifying and finals for the World Cup and European Championship).

Outside UEFA -- where 48 of its 55 have women's national teams -- only a handful of federations operate national teams on a full-time basis -- basically, the USA, Canada and Mexico and the national teams U.S. Soccer invites to its two invitational tournaments -- so additional national team programming is essential, in particular in South America and Africa.

Without a full-time program, there's no incentive to have a full-time coaching staff whose work between events can be just as important in terms of developing and promoting the women's game as when teams are in camps or at matches.

Infantino would like to do it as soon as with the 2023 edition though that will require countries bidding to host the 2023 tournament to modify their proposals, taking into account eight more teams.

Expanding the World Cup would be a balancing act: the value of promoting the sport in eight more nations surpassing the potential cost of diluting of the tournament.

An additional eight teams in 2019 would have added: Panama, Colombia, Philippines, Mali, Switzerland, Belgium, Denmark, Iceland. The difference in quality between these eight teams and those that qualified would not be that great. (The problem for women's soccer is that the quality drops off very quickly after the top 40 or so teams.)

4. Double the prize money for the next Women’s World Cup.

5. Double the investment committed to women’s soccer over the next four-year cycle.

That's an increase from $500 million to $1 billion. “We don’t need all this money in the Swiss banks,” Infantino said. “The Swiss banks have enough money.” FIFA’s cash reserves at the end of 2018 were $2.74 billion. (They are so high in part because the organization self-insures.)

It should be understood that this increased investment would include what what Infantino is already proposing elsewhere. FIFA's figures for investment in women's soccer include the costs of organizing the Women's World Cup and other FIFA women's competitions, prize moneys and payments made for the Women's World Cup and money paid out to confederations and federations as part of their day-to-day operational and development efforts.

FIFA's Forward Development Program pays out up to $6 million to each federation over four years -- up to $1 million a year for on-going programs and up to $2 million for development programs. Programs covered include women's leagues (minimum of 10 teams playing a six-month season) and girls national teams (minimum of four matches).