Memories of Chumpitaz and Cubillas: Welcome back Peru

That Brazil should have reached the final of the 2019 Copa America can hardly surprise anyone. After all, Brazil is the host nation, the disruptive Germans are nowhere to be seen, so the Brazilians have advanced pretty smoothly.

Though with a certain amount of good fortune. How did they manage to get past Argentina in the semifinal? This was surely the best game we’ve seen from Argentina lately, yet Brazil came out on top.

The Fates (yes, the Fates -- not the referee) decreed this to be Brazil’s moment. The 2-0 scoreline makes it look straightforward for Brazil. It was anything but that. So be it, the Fates have spoken.

Brazil in the final. There to face ... Peru. Peru? Peru? This looks like those damn Fates again, playing a sly joke this time. There is, after all, nothing in Peru’s recent history that suggests the team merits a place in the final. Peru won the Copa in 1975, and in the subsequent 15 tournaments the best it has done is a third-place in 2011.

There had been a brief period of Peruvian World Cup promise in the 1970s. That ended with a 6-0 loss to Argentina in 1978. Peru has qualified for two World Cups since then, in 1982 and 2018, but failed to get out of the first round at either event.

Even in the current tournament, Peru’s progress looks surreal. A win, a loss and a tie in the group stage was enough to secure a quarterfinal berth. But that one loss was a 5-0 clattering from Brazil. If that was not enough to quell any Peruvian notions of glory, the formidable Uruguay loomed as the QF opponent.

But a rather different Peru, Phoenix-Peru maybe, arose from the ashes of that 5-0 wipe-out. A Peru that was clearly not intimidated by Uruguay, a Peru that looked younger and livelier -- and better -- than Uruguay. At 0-0, their game went to the shootout. The Peruvians, cool, calm and confident, scored with all five of their attempts. Luis Suarez, of all people, made a mess of his kick, and Uruguay was beaten.

Next up, Chile. By this time, my mind was full of images from the Peru teams of the 1970s. The images came easily enough, those were teams that I had long cherished, that had convinced me that when it came to creative soccer, the Peruvians were second only to Brazil. 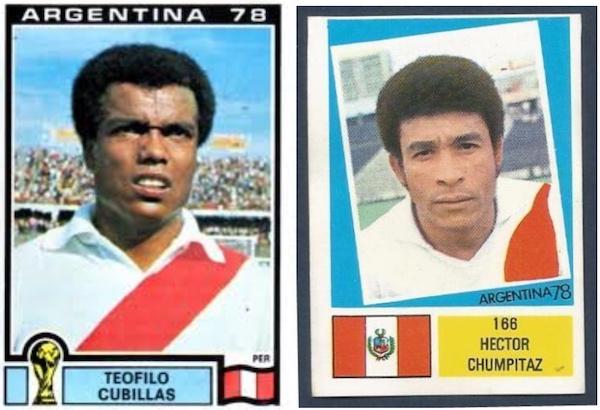 Two players dominate my memories: Teofilo Cubillas, who was a 21-year-old on the 1970 team. And the 26-year-old Hector Chumpitaz. Two quite extraordinary players. They were unknown in European circles. Logically, I suppose -- all 22 of the Peruvian squad played for Peruvian club teams. It was the same for Brazil, Uruguay and Italy -- none of whom had players with foreign clubs.

The Brazilians, such brilliant winners, overshadowed the rest, but the Peruvians had done enough to warrant more attention. Cubillas, probably the most promising youngster of the tournament, did go on to achieve a wider fame but the name of Chumpitaz never spread beyond Latin America.

Yet Chumpitaz was, I think, the most astonishing player I’ve ever seen. He astonished because he was always one of the smallest players on the field, yet he had the audacity to play as a center back. Wikipedia gives his height as 5-foot-6.

It’s difficult to recall such an assured player as Chumpitaz. His positioning, his tackling, quick and firm, never violent, his quite extraordinary ability to win head balls against much taller opponents marked him as special. That he was -- but how much more so when you realize that all those skills radiated from such a small body. Maybe, lurking in that body, there was a small darting center forward trying to get out, for Chumpitaz was ever eager to burst forward in fearsome attacking mode. As a club player, he scored 74 goals.

Chumpitaz, a wee man among tall defenders, starred because of his wonderful skills, his soccer skills. And his enthusiasm. This bubbling, busy, boisterous man was the essence of the 1970s Peru. They played exuberant, joyful soccer because they so obviously enjoyed what they were doing.

But soccer in the 70s was ceasing to be an arena for happy players. It was becoming a theater for worried coaches. The problem for the Peruvians was that they weren’t serious enough. Not professional enough was another way of putting it.

At the time, I asked Rinus Michels what he thought about that. “They are very skilled players,” he replied, “but they are not used to the atmosphere of the World Cup, to the concentrated professional training necessary. For one week, maybe two, they enjoy themselves. After that ... they want to go home.”

That was not an explanation that appealed to me. But it was irritatingly persuasive. I think I eventually came to believe in it, if only as part of my overall view that soccer was being attenuated, that the lively spontaneity of the players was being drained from the sport, replaced -- quite deliberately -- by the pre-planned formations and formulae of statistics-obsessed coaches and nerdy computer boffins.

Now here come the Peruvians again, the Phoenix-Peruvians who took care of Uruguay, then gleefully swept Chile aside, 3-0. Are they merely a throwback to an already-discounted approach? Or are they the guardians of the essential truth of soccer, that it is a game for players, not for stat-freaks and nerds? A truth that we continue to ignore?

During the Peru-Chile game my soccer heart exulted in the second half as Peru’s Andre Carrillo burst out of his own penalty area, setting off a wonderful, quick-passing counterattack. It ended, alas, in anti-climax as Yoshimar Yotun skied the ball over an empty goal.

But the play itself, until that final miscue, was pure soccer excitement. It didn’t work out because -- well, maybe because that’s not the way the game is played these days, or perhaps because the players were not good enough to execute.

I prefer the second explanation. Because I like the idea of a sudden burst of intense, instinctive soccer. A sudden raising of the dramatic and skill levels. I hope to see more of that in the final.

I don’t know that we will get it. That 5-0 defeat just two weeks ago must weigh heavily on the Peruvian minds. A situation that calls for caution. But can Peru play that way? I doubt it. To get the best from their soccer, it has to be attack-oriented. Up until maybe 10 years ago I would have said the same for Brazil. Today I’m not so sure.

It’s been quite some time since we saw the free-flowing goalscoring Brazil, since Brazil looked like Brazil. What I’d like to see in this final -- indeed, what we could get -- is a “spectacular and effervescent game” with both Peru and Brazil playing with “dash and spirit.”

The quotes are from 1970, by English journalist Brian Glanville describing the World Cup clash between Peru and Brazil. Of course there have been massive changes since then. In 1970, all of Peru’s World Cup players were with Peruvian clubs. This year, Peru has 17 players on its 23-man roster who play outside Peru. Similarly, all of Brazil’s 1970 players were with Brazilian clubs; today, of Brazil’s 23-man roster, 20 are with foreign clubs, all of them in Europe.

The ramifications of such a fundamental change are hard to verify. But whatever they are, it is to be hoped that they would not eat away at the sport’s heart. Can we still get a “spectacular and effervescent” game from these two teams?