Megan Rapinoe grabs megaphone to call out FIFA and give nod and nudge to U.S. Soccer 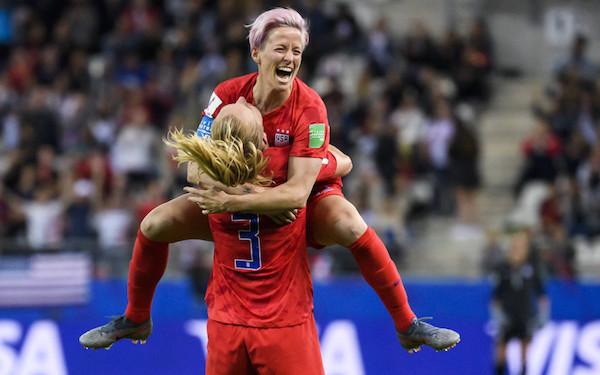 Unless she is named the Player of the Game for Sunday's Women’s World Cup final between the USA and the Netherlands -- in which case she'll get the first three questions -- Megan Rapinoe held her last press conference with the media on Saturday at Lyon's Groupama Stadium.

Other players might have had better World Cups -- none greater than Michelle Akers-Stahl in 1991 -- but no one has ever grabbed the megaphone and held on like Rapinoe.

With the possible exception of Billy Jean King, 42 years her senior, no one has spoken more eloquently or passionately -- and one might add humbly -- than Rapinoe has about women's sports over the last month in France.

“Maybe you don’t agree with every single way that I do it or [what] gets discussed,” she said on Saturday. “I know I am not perfect.”

Saturday was supposed to be a preview of USA-Netherlands, but with U.S. coach Jill Ellis at her side, Rapinoe talked big picture -- about FIFA and U.S. Soccer, offering a nod to the latter for its unparalleled support of women's soccer.

In response to FIFA president Gianni Infantino's proposal to double the prize money for the 2023 Women's World Cup -- an increase still less than the prize money will go up for men's teams at Qatar 2022 -- Rapinoe said the prize money should be doubled now and again in four years so the pay gap doesn't continue to grow.

“If you truly care about the game, are you letting the gap grow?” she asked. “I’m not saying the prize money is $450 million this time or the next time around. I understand for a number of different reasons the men’s game financially is far advanced from the women’s game. But if you really care, are you letting the gap grow? We should double it now and use that number to double it for the next time.”

Rapinoe said the scary part about scheduling three finals on the same day -- the Women's World Cup followed by the Copa America and Gold Cup -- was that no one seemed to have thought about it.

She said FIFA must not take its foot off the pedal in terms of pushing federations to advance the women's game.

“You need attention and detail ... in the women’s game every single day,” Rapinoe said. “I understand it is a very complex problem to be a part of it, but the resources are there. The willingness and the brain power is all there. People wanting to work in the women’s game and make it as good as we can is all there. It’s just a matter of wanting to do it and making it happen. I mean, we’re making a World Cup in Qatar happen.”

"Money from FIFA, money from federations," she added. "Money from advertisers, sponsors, rights-holders, TV. All of that. And obviously not just blindly throwing cash at things, but investing in infrastructure, in training programs and academies for women, in coaching for women. All of it. I don’t think you get to the point of having an incredible business by running it on a budget that’s a dollar more than it was last year. You have to make up-front investments and really bet on the future.”

Rapinoe was one of five U.S. women's national team players who filed a complaint against U.S. Soccer before the EEOC in 2016. That case has been expanded to include 28 women's players and moved to federal court as a gender discrimination lawsuit. Nonetheless, she acknowledged that her federation has outpaced any other federation in terms of the resources it has thrown at its women's national team.

“We don’t often give them kudos," she said, "but that’s definitely one that I’m willing to give. They back the team in a very strong way and have pushed the game, not only in our country but around the world, to a level that without us, we wouldn’t be here in the world game. So I think that they do deserve a tremendous amount of credit for that, and we’ll continue to nudge them forward.”