For the first time at this World Cup, the USA failed to score early. But the USA controlled the midfield, defended so efficiently that goalkeeper Alyssa Naeher needed to make only one save, and overwhelmed the Dutch in the second half in such a way that the 2-0 scoreline didn't reflect the U.S. dominance. With the victory, the USA won its second straight Women's World Cup and has now won half of the eight titles since the tournament's inception in 1991. Megan Rapinoe opened the scoring with a penalty kick after a foul on Alex Morgan and Rose Lavelle struck from 18 yards for the second goal. 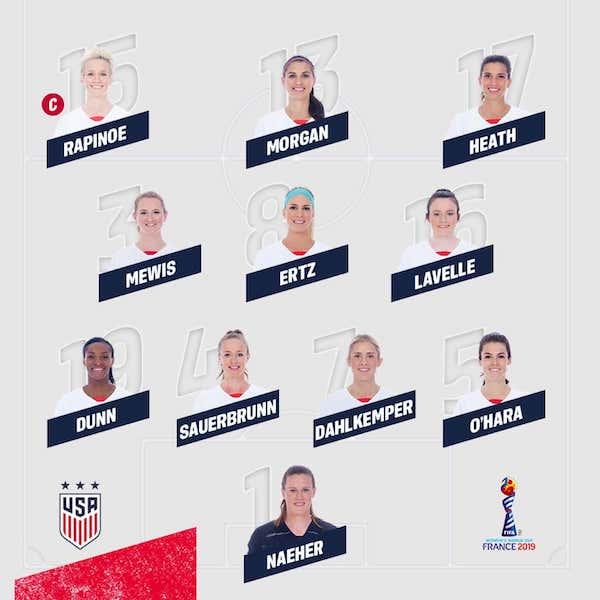 Lineth Beerensteyn's 77th-minute shot down the middle was the only Dutch attempt Alyssa Naeher had to save, but she darted out of her penalty area to clear a through ball in the 25th minute, and also distributed well.

Right back Kelley O'Hara -- whose cross-field pass to Megan Rapinoe in 8th minute signaled that the USA would be attacking in a variety of ways -- shut down Lieke Martens but had to be subbed at hafltime after the two clashed heads in the first-half stoppage time. Not all of Abby Dahlkemper's passes out of the back reached their target like her early delivery to Tobin Heath, but they tended to unsettle the Dutch. With Dahlkemper and Becky Sauerbrunn, who also won balls further upfield, patrolling the central defense, the Dutch forwards managed only two shots. Sauerbrunn's pinpoint pass to Rapinoe in the 38th minute led to a chance for Alex Morgan. Left back Crystal Dunn cleanly kept the Dutch from any success on their right wing while they fouled her three times. Dunn robbed Danielle van de Donk with a crisp tackle in midfield to spark the counterattack that led to the USA's second goal. Dunn also forced one of keeper Sari van Veenendaal's big saves, in the 76th minute.

Rose Lavelle's dribbling skills caused immediate problems for the Dutch. That Sherida Spitse got yellow-carded in the 10th minute for a foul on Lavelle handicapped the rugged Dutch midfielder for the next 80 minutes. Lavelle's strike -- after her feint befuddled Stefanie van der Gragt -- to make it 2-0 was one of the tournament's slickest strikes. Sam Mewis, who delivered the ball to Lavelle on that goal, nearly scored on a first-half header that van Veenendaal blocked with her torso. Julie Ertz made massive contributions in all parts of the field. She roasted Vivianne Miedema before passing to Alex Morgan for an 18-yard shot that van Veenendaal stopped with a diving save. Ertz, who also set Morgan up for a 72nd-minute shot, headed just wide early in the second half and struck a fierce volley on the turn that van Veenendaal saved in the first half. In between the two U.S. goals, Ertz intercepted a cross in the U.S. penalty area and won tackles inside the area and just outside.

Megan Rapinoe, whose converted penalty kick gave the USA the lead, set up chances for Alex Morgan, Mewis, Ertz and Tobin Heath. Heath crossed the ball to Morgan on the play in which van der Gragt recklessly kicked Morgan for the penalty kick. Morgan threatened the goal more than she had in any game at the World Cup since the Thailand opener, but was denied four times -- twice spectacularly -- by van Veenendaal. Heath kept the pressure on the Dutch such that they hardly threatened to come back late in the game -- and should have added to the scoreline. She had three chances to unleash shots but hesitated long enough for the Dutch defense to regroup.

Ali Krieger replaced O'Hara at right back for the second half and got help from Ertz the only time she was beaten. Krieger also came forward to set up a Morgan shot that went to the keeper. 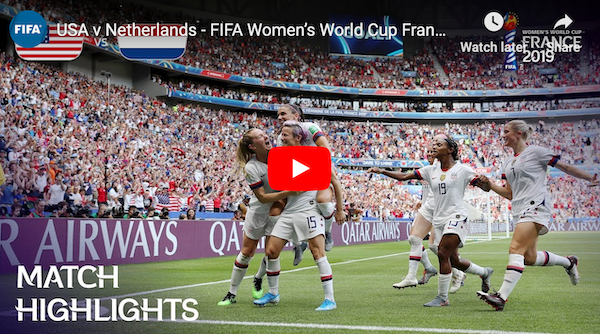