The greatest women's team of all time 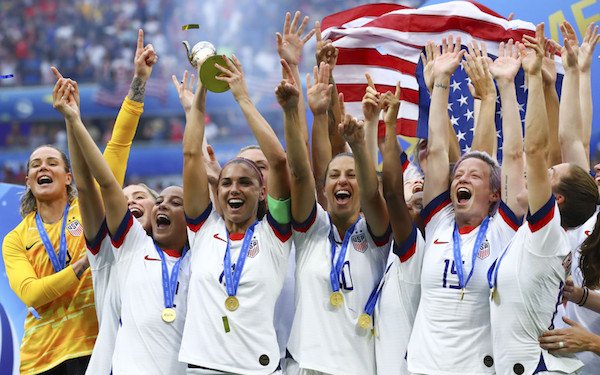 The American beast entered the European den and crushed everyone in its path en route to a fourth world championship.

Women's soccer is changing quickly with European nations pouring more resources into the game than ever before, but for now, they're still no match for the USA.

After easy wins over Thailand (13-0) and Chile (3-0), the USA faced five European teams, all ranked in the top 13 in the world, and beat them all, beginning with Sweden, which went on to finish third in the tournament after losing its group match to the USA, 2-0.

In the round of 16, Spain proved to be the USA's longest holdout. The battle of Reims quickly turned nasty, and it wasn't until the 75th minute that the USA went ahead for good when not for the last time in the tournament it was awarded a penalty kick thanks to VAR.

The quarterfinal against host France was billed as the "match of the century." It took the Bleues, urged on the majority of the capacity crowd at the Parc des Princes, more than an hour to grow into the game, but when they did they waged an assault that was so impressive U.S. coach Jill Ellis said it was the most intense game she had every been involved in.

The semifinal against England was billed as another "final before the final," and it was the one game in which the USA needed some luck. After playing its best soccer of the tournament in the first half hour, the USA sat on its 2-1 lead and almost paid the price in the second half. VAR wiped out a tying England goal for offside, and nerves got the best of the Lionesses' captain, Steph Houghton, whose weak penalty was saved by keeper Alyssa Naeher in the 84th minute.

The final against the Netherlands, the reigning European champion, was anticlimactic. The Dutch also entered Sunday's final in Lyon with a perfect record, but they showed signs of fatigue.

Lieke Martens, the 2017 FIFA Women's Player of the Year, injured her toe celebrating her winning goal in the round-of-16 match against Japan and wasn't a factor the rest of the tournament. The heat wave that struck France got so bad that the Dutch, forced to kick off at 3 p.m. against Italy in the quarterfinals, pleaded -- unsuccessfully -- to get the start time in Valenciennes pushed back. Compared to the USA-England barn-burner, the Netherlands-Sweden semifinal the next night in Lyon was a snoozer.

In the final, Dutch keeper Sari van Veenendaal twice denied Alex Morgan with spectacular saves and parried a fierce shot by Julie Ertz to keep the match scoreless at the half, but it never looked like the Netherlands would reward the thousands of orange-clad fans who made their way to Lyon with a goal.

The biggest scare for the USA came when Kelley O'Hara couldn't return to start the second half after being involved in a collision with Martens at the end of the first half, and Becky Sauerbrunn needed a bandage to repair a cut on her forehead.

“I said to the players at halftime at some point it’s going to break, and it’s going to break our way, whether that’s through a penalty kick, a set-piece or open play transition," she said. "I just felt that we would have our opportunity.”

VAR came to the USA's rescue again when French referee Stephanie Frappart missed a foul by Stefanie van der Gragt on Morgan but pointed to the spot after being alerted by her VAR crew and watching the replay for herself. Other penalty kick takers had missed -- the English missed three times from the penalty spot -- but Rapinoe calmly slotted the ball to van Veenendaal.

It was then Rose Lavelle's turn to finish off the Dutch. The tiny midfielder had been the best player on the field for the first half against England, and she was rewarded in the final, scoring after leaving van der Gragt befuddled at the top of penalty area.

But for van Veenendaal in goal and some dilly-dallying by U.S. attackers in alone on the Dutch goal, the final score could have been easily 6-0 or 7-0.

Considering the target on their back and all the different issues -- equality, pay quality, gender -- they carried willingly on their shoulders, the 2019 U.S. Women's World Cup champions will go down as the greatest women's team of all time.