Gold Cup: Gregg Berhalter on what separated Mexico from USA 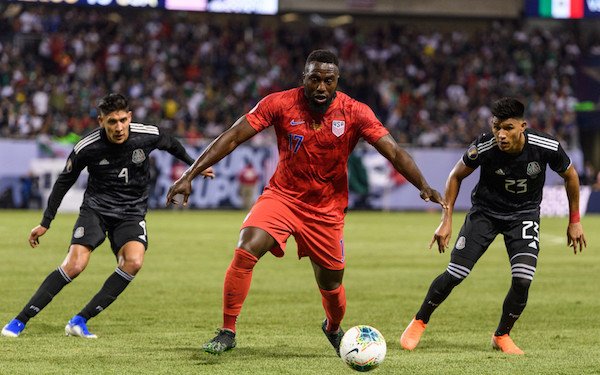 Mexico's eighth Gold Cup overall came thanks to a 1-0 win over the USA before a pro-Mexican crowd of 62,493 at Chicago's Soldier Field. The USA had the early edge with a flurry of chances but left Mexico off the hook. El Tri dominated the second half and finally broke through on Jonathan dos Santos' goal in the 73rd minute to give new head coach Tata Martino his first international title.

Second-half struggles. The game started to get away from his players in the second half.

"It became a very vertical game," Berhalter said, "and it opened up a lot of space. We needed to avoid that by being able to keep [the] ball, being able to move the ball side to side, moving more horizontally rather than vertically. We were rushing attacks in the second half, much too direct, and it cost us energy."

McKennie's armband. At the age of 20, the second youngest starter on the team, Weston McKennie was given the captain's armband in the final. Berhalter would not comment specifically on the play of McKennie, who lost dos Santos on the winning goal, but he praised McKennie and the USA's other young European-based star, Christian Pulisic, for how they progressed.

"If you think about a player that's relentless on both sides of the play, offensively and defensively, when we're able to see his progress and maturity in this one period, our goal all along was to bring out guys along and bring out qualities of the young guys," he said. "If you look at Christian Pulisic, his contribution to the team this tournament was fantastic. Both sides of the ball. Off the field. Weston was similar. He started maturing, and as he started to realize what level he could play at and what importance you could play to the team, you really saw it in the latter phases of the tournament. Today was a difficult game for a lot of players."

Second-half subs. Berhalter's choice of subs -- Cristian Roldan for Jordan Morris, Gyasi Zardes for Jozy Altidore and Daniel Lovitz for Tim Ream -- raised many eyebrows, or at least underscored the lack of depth in the pool of players he had at the Gold Cup.

"When we brought on Cristian, the idea was to help us keep possession," Berhalter said. "It was to help us overload the center of the field. I thought we had a difficult time in the center of the field tonight. We felt like he was going to give us the help that we needed centrally, and I think he did well. With Gyasi, it was a case of legs, just getting fresh legs. It's very hard to press Mexico if you don't have the stamina, if you're not ready to spring really hard. Jozy put in good shift. We were using him a lot, and I think he did a good job. But we needed some legs there. In Daniel's case, at the end of the game we wanted width, we wanted to move our wingers inside and get some crosses into the penalty box. We were willing to risk more staying with a two-and-one on the back line , getting our fullbacks high, tucking our wingers inside and trying to create pressure that way."

Six weeks together. The time Berhalter had together with his core of first-choice players extended more than six weeks, in the case of a few players, the longest he'll get with them before World Cup 2022 qualifying starts and he said they made strides.

“I think the guys will learn a lot from this game, that's the first thing," he said. "There’s a lot of guys playing in their first game like this. For us, the whole month the focus was on that we need to make progress, and when I look back it at it and evaluate it, I think we did make progress. This experience will help us moving forward.”