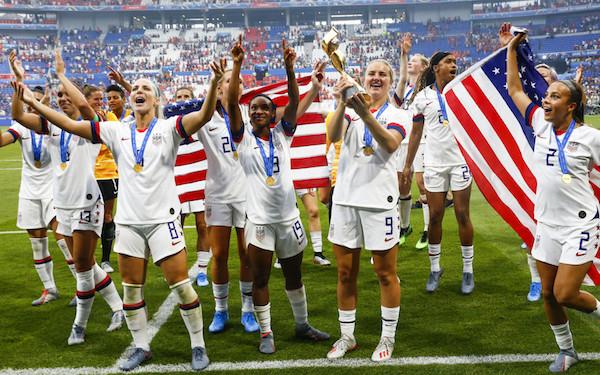 On and off the field, the 2019 Women's World Cup, hosted by France, was a ground-breaking event.

The USA was the big winner, in a category by itself, defending its title in record-breaking fashion.

We present here our 10 winners, in no particular order, of the Women's World Cup ...

Said teammate Christen Press whom Rapinoe kept out of the starting lineup, “It’s been beautiful to see her fearlessness as we get to the highest level and the highest stages, that she doesn’t back away, she doesn’t shy, but the opposite: She gets even bigger."

Rapinoe won the Golden Ball as the best player of the 2019 Women's World Cup and Golden Boot as its top scorer, edging teammate Alex Morgan and England's Ellen White in a tiebreaker thanks to her three assists. She took on President Donald Trump and FIFA and everything that came in her way.

Arriving late for the post-game press conference after the final because she was randomly selected for the doping test, Rapinoe said, "Hey, I just killed doping, if anyone is concerned.”

No one would have anticipated some of her moves -- bringing on Carli Lloyd in a defensive role against France in the quarterfinals and not even playing Lindsey Horan, arguably the USA's best all-around player, in the final.

Her view of the criticism? "I don't really care." And the critics? "People know about 1/10th of what we do."

3. Free-to-air TV. The most stunning aspect of the 2019 Women's World Cup was the interest in television audiences around the world. (Interest in the United States was strong but still less than 2015 for most U.S. matches because of the difference in kickoff times.)

More than 35 million people watched the France-Brazil overtime match on Brazil's Globo TV, smashing the world record for a Women's World Cup set by Fox when 25.4 million watched the USA beat Japan in the 2015 final.

France's matches on TF1 drew the largest audiences of the year on the host country's most popular network. England's semifinal defeat to the USA attracted the highest peak television audience of the year so far on British television. The Netherlands-Sweden semifinal on NPO1 was the most-watched program on Dutch television in almost five years.

What they all have in common is they are free-to-air networks -- our equivalent of ABC, CBS, NBC and FOX. Experts credited the record viewership for the Women's World Cup to increased media and social media interest in the tournament, increased promotion of the events by the networks themselves and the accessibility of the matches at a time when more and more major soccer competitions are only available on a pay basis.

The latter in itself was most noteworthy -- fans were starved for soccer viewing and found women's soccer appealing.

4. Rose Lavelle. The world was supposed to be catching up to the United States, and in some regards it has. But the breakout star of the 2019 Women's World Cup was an American, not a foreigner, and a player who was playing college soccer four years ago.

In just her third pro season, Lavelle, a product of the University of Wisconsin, was the best player on the field in the semifinals and final, when she scored the insurance goal, making the ordinary extraordinary.

Said teammate Kelley O'Hara, watching from the sidelines after being subbed off with a head injury, “Freaking lost it. That was insane. That girl is -- I knew when she started driving with the ball, I knew it was going in, because that’s just what she does. I feel like she just does things casually that are out of this world.” 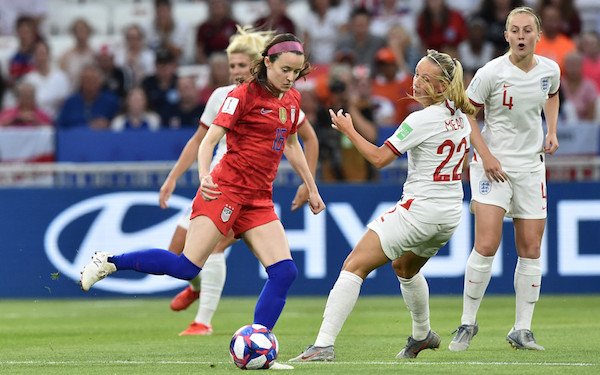 5. U.S. fans. An army of supporters followed the USA across France.

From Reims to Paris to Le Havre for the group stage. Back to Reims and Paris and on to Lyon for the final four. The estimates grew to 10,000 fans at the Parc des Princes for the France game and 20,000 and 25,000 fans for the two games in Lyon. Numbers so large they overwhelmed unprepared local transportation companies.

Local businesses loved the U.S. fans. They weren't as visible as the hordes of beer-drinking fans who came for Euro 2016 but they came as families and ready to spend lots more money, quickly snapping up the scarce supply of World Cup merchandise.

As part of its new Collective Bargaining Agreement signed with U.S. Soccer in 2017, the USWNT won back its group licensing rights. With more than 25 licensing agreements, that could bring in an additional $1 million collectively to the U.S. champions on top of their salaries and bonuses.

The New York Times' feature coverage matched that of its coverage of the men's tournament in recent editions with stories on such topics as the players in the first international women's match recognized by FIFA, a 1971 France-Netherlands encounter, and how the U.S. women have been a source of inspiration to LGBT soccer players in France. The Equalizer, which specializes in women's soccer, presented unmatched analysis of all 24 teams in the tournament.

For the first time, L'Equipe, the French sports daily, treated the Women's World Cup like it would the men's tournament, even after France was eliminated with page after page of analysis and features and player ratings. It devoted the first eight pages on Monday to the USA-Netherlands final and other tournament news (including French coach Corinne Diacre's blistering criticism of some of her players in her first remarks since the Bleues were eliminated). The coverage was remarkable because it came on the second of the Tour de France, an event owned and operated by L'Equipe's owner, the Groupe Amaury.

8. Alex Morgan. Morgan has been around so long and is such a mega-star that it's easy to forget how good she actually is.

Even in this World Cup when she scored only one goal after she tied a Women's World Cup with five goals in the 13-0 win over Thailand in the opener. All she did was have a hand in the winning goal in the USA's last three victories.

In that regard, L'Equipe dubbed Morgan "Neymar's little sister" in her ability to win penalty kicks. 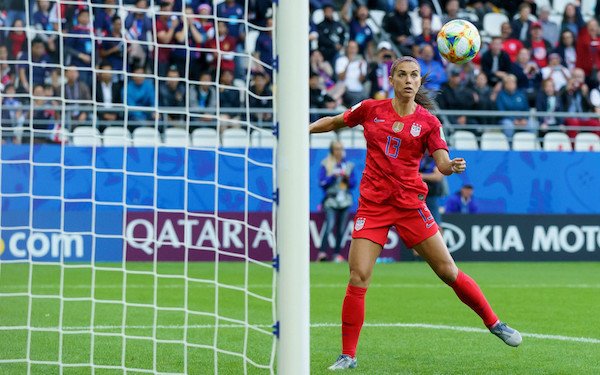 During the Women's World Cup, Real Madrid announced plans to buy a Madrid club and start its own women's program. Trying to capitalize on the interest in women's soccer, Man City will play Man United for the first time at the main Etihad Stadium on Sept. 7 while Chelsea will play Tottenham at Stamford Bridge the following day and make entry free for all fans.

Even if paying support at the club level lags far behind the NWSL, the top European clubs are well-positioned to use the Women's World Cup as a springboard to faster growth.

10. Equal pay. Just how much the U.S. women's fight for equal pay resonated was evidenced by the chants of "Equal pay! Equal pay!" that filled Lyon's Groupama Stadium as FIFA president Gianni Infantino and French president Emmanuel Macron made their way to the field for the trophy ceremonies after the final.

How the U.S. women settle their lawsuit with U.S. Soccer and how FIFA changes its allocation of prize money remains to be seen, but it's a battle cry that has gone worldwide. Rapinoe said it was time to move on to other battles to get more funding for women's programs from federations and leagues.

“We as players, every player at this World Cup, put on the most incredible show that you could ever ask for," she said. "We cannot do anything more to impress more, to be better ambassadors, to take on more, to play better or do anything. It’s time to take it forward to the next step. A little public shame never hurt anybody, right? I’m down with the boos.”