The 2019 Gold Cup is now in the history books and it was the first major test of Gregg Berhalter’s tenure as head coach. The results were decidedly mixed but if he learns the lessons that the tournament offered, the team could be in good shape as it rebuilds from the failure of 2017 and from a generation of players who did not produce much by way of national team talent. 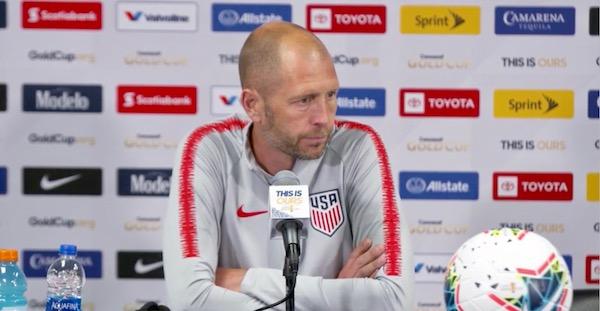 For one, losing to Mexico in a Gold Cup final is always a bitter pill and a missed opportunity to build genuine enthusiasm for the program. Recall back in 2007 when Bob Bradley took over the team on the heels of a very poor World Cup and the federation essentially shutting the team down for six months in a failed effort to hire Jurgen Klinsmann as the coach. There was a lot of cynicism around the team and the win over Mexico in the 2007 Gold Cup final helped start a genuine upward trend for the 2010 cycle.

The failure to win the Gold Cup and losing to its archrival in the final will, unfortunately, see the pessimism linger throughout the fan base and some in the media.

In some sense that is fair too. Mexico is better than the U.S. team right now and there is no denying it. The U.S. played well for stretches in the final in creating enough chances to win but only to see the finishing come up short. The U.S improved throughout the tournament but it is still not far removed from the woeful pre-Gold Cup friendly losses to Jamaica and Venezuela.

This team is also in worse shape than the one Bob Bradley had in 2007. At that time, key players like Landon Donovan, Carlos Bocanegra, DaMarcus Beasley, Tim Howard, and Clint Dempsey were in their prime mid-20 years for that Gold Cup. Steve Cherundolo was injured for that tournament but still part of a core in their prime.

Berhalter is in a tricky spot trying to rely on a group that is very talented, but much, much younger and inexperienced in the international game. Trying to nurture that group without a dependable group in their prime to help bail them out when they make youthful mistakes is difficult.

This team is going to take a lot of work but this tournament helped bring the state of the team into a clearer picture. There were some obvious lessons to be learned as well as some key questions with not-so-obvious solutions.

Here are five big takeaways for the U.S. team from the Gold Cup as it prepares for the fall.

1. The forward pool is murky

Right now, there is no position more unsettled on the U.S. team than at forward. Jozy Altidore will be criticized for his miss in the first half when he took a long pass from Tim Ream, beat his defender, and missed a clear chance alone on Guillermo Ochoa. The reality, however, is that Altidore helped the team more than he hurt it

Altidore’s hold-up play was something that has been missing. On multiple occasions, he held the ball under pressure to allow his teammates to join in the attack. He was then able to play the ball off to them in advanced positions. The rest of the team clearly played better with Altidore on the field, despite the fact Altidore was unable to score.

The problem is that there is no real answer after Altidore and that is a big problem given Altidore’s history with injuries (which have often affected his ability to either play or play fully fit in important games).

Gyasi Zardes had two nice moments against Trinidad & Tobago but was otherwise poor. The problem, however, is that no options are particularly enticing.

Andrija Novakovich had a decent season in the Netherlands (a league which Berhalter and general manager Earnie Stewart know well) but it remains to be seen if it will translate to a higher level. Sebastian Soto had a good U-20 World Cup

Josh Sargent and Tim Weah (also a winger) are probably the most ready of the very younger options although neither is an ideal situation. Sargent did not play much for Werder Bremen after the winter break and he also did not play for its reserve team to stay sharp. He will have a lot of questions heading into the upcoming season. The same should be said of Weah who is fresh off a transfer to Lille.

2. Tyler Adams must play the midfield

Tyler Adams was not on the Gold Cup due to an injury but while it seemed as if Berhalter was going to play him at right back, it is clear after this tournament he needs to be in the midfield for two reasons.

First, there is no need for him at right back. DeAndre Yedlin now has a lot of Premier League experience and is likely the number one. At the Gold Cup, Reggie Cannon was terrific when on the field and he had a great final. Nick Lima wasn’t bad. Youngsters Sergino Dest and Julian Araujo are still a ways off but are legitimate prospects. The state of the national team pool isn’t great overall, but right back is one of the stronger areas in terms of depth.

Second, Adams is an upgrade over existing midfield options. Michael Bradley was pretty good against Mexico until he fatigued, Weston McKennie struggled against Mexico – but was pretty good for most of the tournament. Bradley and McKennie seemed to struggle with their chemistry and this hurt the U.S. team when controlling games. Wil Trapp simply looked behind the other options.

Adams at the No. 6 (defensive midfielder) and McKennie at a No. 8 (central midfielder) or dual No. 10 (attacking midfielder) role seems to be a duo to develop overtime with Bradley serving as the backup (and there's still very much a role for Bradley on the team). Adams has the endurance and defensive instincts to do very well in that position.

3. What are the central defense pairings?

The backline generally performed well at the Gold Cup. Left back wasn’t great but the options there are almost as dire as the forward options. Still Tim Ream was decent in the final.

But in central defense there are several options that Berhalter will have to bring clarity. On the Gold Cup team, Aaron Long, Matt Miazga, and Walker Zimmerman all performed well while Omar Gonzalez looked too slow at the moment.

John Brooks was injured for this tournament but seems most likely to take Gonzalez’s place mostly likely leaving the four central defender in a 23 player roster to be Brooks, Miazga, Long, and Zimmerman. What is the first-choice duo? What is the chemistry between all of them in case there are injuries? Solid central defense is an excellent attribute for a team looking to rebuild.

Finally, are there other options who can push those four to prevent complacency? Can the large contingent of Olympic eligible central defenders Erik Palmer-Brown, Cameron Carter-Vickers, Miles Robinson, Justen Glad, Chris Richards, or Austin Trusty continue to raise their games to provide healthier competition? That will be an interesting question over the next year.

4. The role for newcomers Boyd and Holmes

Duane Holmes made the initial Gold Cup team but had to be replaced. Tyler Boyd played well in the tournament early but disappeared after a subpar effort in the quarterfinals.

Both players are new to the U.S system and neither had played or known any of the players before arriving at camp. It seemed only natural that Boyd was going to hit a rough patch, and that Holmes would have as well had he been healthy.

But both players showed through their club performances and initial national team runouts that they are deserve future call-ups and patience as they adjust and learn. Both play positions were the U.S. team is thin. Boyd can be an explosive winger and Holmes can be a gritty and energetic playmaker – who also plays much needed defense in the middle of the field.

The Gold Cup revealed that there is clearly a need for both Holmes and Boyd.

On the wings, Paul Arriola played well and justified his spot on the team. While he wasn’t always polished in the final third, he brings a ton of energy and defensive work to the game. Aside from him, the winger pool isn’t particularly great – especially if Christian Pulisic plays as a No. 10. Jordan Morris was ineffective against Mexico and invisible for long stretches in the semifinal against Jamaica. Boyd would be a much-needed addition here.

For Holmes, he would likely fit one of the two dual No. 10 positions in a 4-1-4-1 formation. The Gold Cup revealed that this area could use a boost. Pulisic and McKennie played those roles but beyond them, it wasn’t stable (not to mention Pulisic might be better suited out wide). Cristian Roldan was decent against Mexico off the bench but hasn’t made much of an impact with the U.S. team this year and Djordje Mihailovic is probably better suited for the U.S. U-23 team right now.

Holmes brings a lot of experience from the English Championship and plays in a way that fits Berhalter’s system. He plays strong defense in terms of winning the ball, he is feisty, but he’s also very creative.

The past six weeks showed that both players are on the radar for Berhalter but this Gold Cup revealed that a worthy goal for the upcoming slate of games should be to get them integrated to the point where they can take big role within the U.S. men's national team.

5. Which new players are ready?

The core of this year is very young and the roster will evolve with time. The good news is that more younger players are starting to emerge and make cases for themselves. But some of these players are still only just starting their careers at the first-team level. It will be interesting to see which players Berhalter believe are ready, and which he believes need more time with their clubs or the U.S. U-23 team.

Weah and Sargent are likely names given their previous involvement with the national team and the need for forwards and/or wingers.

For central midfield options, Paxton Pomykal and Jackson Yueill look promising and juggling their involvement with the U.S. U-23 team over the next year will be challenging.

There are plenty of other options too that will likely emerge over the next year or few years. Fullbacks Dest and Chris Golster, central midfielders Alex Mendez, Richard Ledezma, Brandon Servania, and Brendan Aaronson, forwards/wingers Jesus Ferreira, Jonathan Amon, and Soto are all part of a promising young generation that will hopefully breakthrough, keep things competitive, and perhaps even surpass existing options.

The loss against Mexico clearly stung for American fans but the reality is that Mexico is just better at the moment. For a team stuck in the middle of a rebuild with a very young core, it competed very well against Mexico and had legitimate scoring chances to win. When looking at the very big picture, it is encouraging to see the potential on the horizon.