How the quest for back pay in the U.S. women's team lawsuit could play out

If the U.S. women’s team lawsuit was simply seeking some adjustments to the current collective bargaining agreement, signed in 2017, the federation would likely make a deal rather quickly.

But the lawsuit also has a reference to “back pay.”

They’ve declined to specify what back pay they’re seeking.

Let’s say it’s everything — all the friendly bonuses (taking the base per-game bonus and adding to win/lose/draw bonuses so that they equal the men’s bonuses) and especially the World Cup bonuses.

Then let’s look at the years 2013-18, using actual results and attendance figures, and plug in the figures from the women’s previous deal (the CBA signed in 2005 and then extended by a Memorandum of Understanding in 2013) and the men’s CBA that’s been in effect throughout that period.

How much money would U.S. Soccer owe the U.S. women’s team?

Just for those six years — we don’t know how far back the women’s team wants to go. 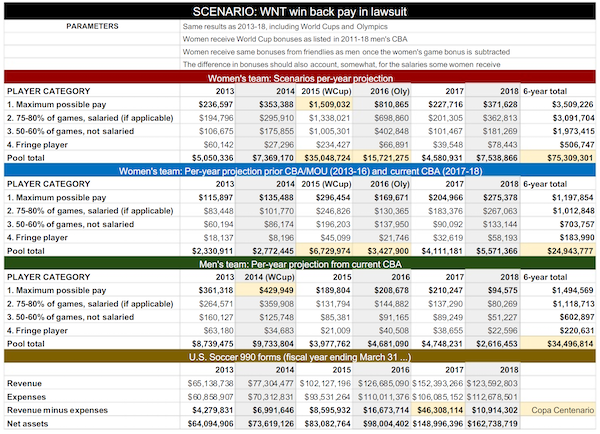 So the women might be asking at the perfect time. U.S. Soccer’s revenue has been trending upward (no, it’s not all because of the women’s team, though they’ve helped) since the federation was nearly broke in the early 2000s. The Copa America Centenario, a men's tournament, brought in almost $72 million over two years — a one-time windfall that accounts for nearly half of the surplus.

Those are the facts. Here are the questions:

Would anyone cry foul over money from a men’s tournament going to pay women a sum that’s well in excess of what they negotiated?

It’s not an easy question. The women signed the previous CBA, the last full-fledged deal until 2017, when women’s soccer was at a low point in the mid-2000s. Perhaps they’re due a big payout.

What sort of precedent would be set?

Let’s be generous and say FIFA triples the Women’s World Cup win bonus to $10 million. Now let’s say the men negotiated a slight raise in their next CBA (they’re currently playing under an expired CBA) to $30 million, and U.S. Soccer is compelled to match that for the women.

That would mean every time the U.S. women win the World Cup, U.S. Soccer would lose $20 million.

Perhaps they can make up that money in increased sponsorship. At least part of it. That’s much more difficult to quantify, even with Allstate paying up for a Victory Tour and getting the U.S. women to toss out the part of the new CBA that said a post-event tour would take place only on FIFA dates.

Should more of that money go to the next generation?

You may have noticed that the U.S. men aren’t doing that well. At youth level, they’re doing a bit better — three straight U-20 quarterfinals, and the quarterfinals of the last U-17 tournament.

To rectify the situation, we’ve seen a lot of suggestions along these lines ...

• Spend money on the boys and girls Development Academies, maybe even making all of them free.

• Do everything possible to give every kid in the country access to a soccer field.

• Do everything possible to get scouts to identify talented players and coaches to coach those players everywhere in the country.

• Along those lines, rev up the declining Olympic Development Program.

• Spend more on the NWSL. (That’s the U.S. professional women’s league, in case you’re someone who just arrived on the women’s scene.)

And in the contentious 2018 U.S. Soccer presidential election, we heard all sorts of other suggestions for the surplus.

• Paralympic soccer — note that U.S. Soccer is scrambling to start a 5-a-side (visually impaired) team, with massive help from the U.S. Association of Blind Athletes, in response to a shocking change in the Paralympics to keep that game in the Games while eliminating the 7-a-side (physically impaired) game in which the USA are competitive.

To do it all, U.S. Soccer would need a concerted effort to pull everyone together in the search for more income. That would mean ending the in-fighting among everyone from youth soccer fiefdoms to the exploding gender war among U.S. fans.

So the legislation introduced by Sen. Joe Manchin to ban federal support for the 2026 World Cup unless U.S. Soccer institutes “equitable pay,” not defined in Manchin’s bill (I’ve asked Manchin’s office and the office of West Virginia coach Nikki Izzo-Brown, whose letter prompted Manchin’s action, to elucidate) is probably not the way to go.

To spend money, U.S. Soccer is going to have to make more. Then maybe everyone — the current women’s and men’s teams, the next generations, the scouts, the coaching educators and people trying to fulfill the federation’s mandate of soccer for everyone — can get the support they’re seeking.

• Delving into the complexities of 'equal pay for equal play'

women's national team, women's world cup
10 comments about "How the quest for back pay in the U.S. women's team lawsuit could play out".
Read more comments >
Next story loading