You have to pay close attention to realize just how an extraordinarily wonderful coach Jill Ellis  is. And that’s how it should be.

Among soccer’s greatest attributes, attractions and challenges is that it’s a players’ game. The soccer coach’s influence during a game is significantly limited compared to, for example, football, basketball and baseball.

This isn’t a criticism of those sports, simply a reminder of how different they are from soccer. An NFL quarterback who makes $20 million a year has a headset in his helmet so the coach can tell him which play to run.

Even the more free-flowing sport of basketball allows for constant substitutions and timeouts that give the coach major influence over the proceedings.

A World Cup soccer coach can make only three substitutions in 90 minutes and give a halftime talk. The real coaching happens at practices. Although some of them pace on the sidelines screaming instructions and gesticulating in a way one has to wonder if they’re performing for the TV cameras. How else to explain England coach Phil Neville prancing around in the technical zone at the Women’s World Cup in a three-piece suit?

Ellis, on the other hand, watched her team’s games sitting on the bench. She got up occasionally during stoppages (or more often sent assistant Tony Gustavsson) to relay information to her players – at times and in a manner when it can actually be effective. The viewers may have barely noticed Ellis, but the tactical adjustments she did make during games all succeeded at the World Cup.

Ellis’ body language conveyed confidence and trust in her players. When games got tense for the U.S. players, if they glanced over at the sideline, they would see their coach completely composed. Which is how a leader should look when under pressure. 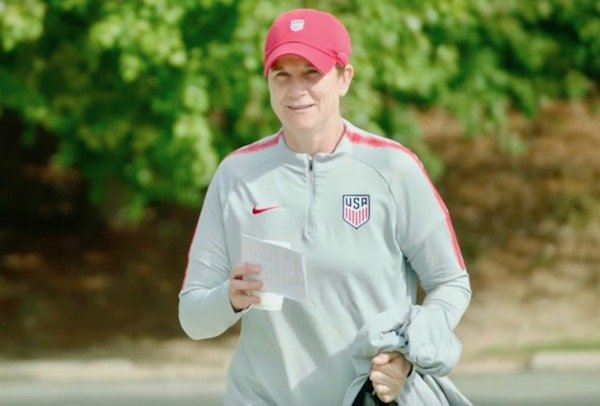 During this World Cup we saw more of Ellis being interviewed than ever, thanks to the FIFA press conferences. They got extra attention when Megan Rapinoe became a mainstream news story. What comes across clearly when Ellis talks about her players is how much she respects them and how fond she is of them. Ellis always looks like she's enjoying her job. And she knows -- it's obvious from watching her players -- that soccer should be fun, even for adults. (Coaches of two teams the USA beat, France and England, often looked like they'd rather being doing something else.)

And it must be noted how much pressure Ellis has been under since she was named USA head coach in 2014. Then USSF President Sunil Gulati announced upon hiring Ellis that her task was to guide the USA to their first World Cup title in 16 years.

Ellis succeeded in 2015. And this summer she became the first coach to guide a team to two straight Women’s World Cups titles. That’s an extraordinary achievement.

The USA may be a women’s soccer power and perennial Women’s World Cup favorite, but when Ellis took the helm it had not lifted the World Cup since Tony DiCiccio coached it to the 1999 win.

Moreover, managing the U.S. women’s national team comes with unique challenges. So well recounted in Caitlin Murray’s book, “The National Team,” were the player revolts, successful in some cases, and the difficulties faced by April Heinrichs, Greg Ryan, Tom Sermanni, and even Pia Sundhage. Among them, balancing the veteran talent with the integration of the next generation.

Ellis, whom Gulati kept faith in after the USA’s 2016 quarterfinal exit from the Olympics, has navigated that well enough to win two World Cups in an era when other nations have increased support of their women’s teams. In France, she managed a 23-player squad in such way that playing seven games in 26 days never seemed to strain the USA at all.

In a smart and effective manner, all 20 of the USA’s field players saw action after the first two games in France. By all appearances, Ellis and her staff created an environment that maintained team spirit and unity. As one insider described it, Ellis valued each one of the 23 players and sincerely conveyed that to them.

Ellis also deserves credit for orchestrating a coaching staff -- Gustavsson, a finalist for her job back in 2014, Virginia coach Steve Swanson, Graeme Abel and Dawn Scott – so well-suited to guiding a squad through the World Cup.

The U.S. team’s high-standard of discipline has served it well and establishes them as examples to young players.

The USA won the 2019 World Cup while committing the fewest fouls per game among the teams that reached at least the quarterfinals. By my assessment, the USA, not France, should have won the Fair Play Award. The USA had an equal yellow card rate to France with a foul per game average of 8.4, while France committed 9.6 fouls per game.

During the USA’s 2015 and 2019 World Cup wins, its backline committed only 14 fouls in each tournament.

Before the tournament, I asked Julie Ertz – who as central defender and defensive midfielder committed only five fouls in 14 World Cup games -- about the USA fouling so infrequently.

“Timing is everything as a defender,” Ertz said. “Our whole team aims to defend well and what that means is not just tackling but tackling and winning the ball. We take pride in that. And we’re aware that set pieces are huge in tournaments, huge in any game, because they give the opponent a scoring chance.”

In the quarterfinal against France, neither central defender, Abby Dahlkemper nor Becky Sauerbrunn, committed a foul while defending superbly against the French in the 2-1 win. Sauerbrunn’s penalty-kick foul vs. England was an aberration for the USA and went unpunished thanks to Alyssa Naeher’s save. The refereeing often was lenient at this World Cup, but the USA never seemed to even consider exploiting that. When Spain did, the USA didn’t stoop to its level. And leading the team is Ellis, who does not berate or criticize referees.

We have, at the youth level, far too much over-coaching from the sidelines when players should be learning to make their own decisions, and far too much referee abuse, which among other things distracts players from focusing on their own responsibilities.

In Jill Ellis, American soccer has a coach who not only wins world championships, but serves as a role model for coaches at all levels.

Jillian Ellis, 52, started coaching at age 16, at her father John Ellis' soccer camps in Northern Virginia, shortly after her family arrived from England. John, a former Royal Marine Commander who had worked in collaboration with the English FA in a "Hearts and Minds" soccer campaign in Asia, had been recruited to introduce to European-style youth soccer programs to the Northern Virginia. Jill Ellis played pickup soccer in England with boys but was first able to join a team when she arrived in the USA. She played college ball at William & Mary. She left coaching briefly after serving as graduate assistant at North Carolina State to become a technical writer. But quickly returned to the game -- "I wasn't fired up about what I was doing, wearing a business suit and high heels everyday" -- and became University of Maryland assistant coach and coached youth club ball in Bethesda. She became the head coach at Illinois, charged with launching the women's soccer program, in 1997 and started coaching for U.S. Soccer. In 1999 she moved to UCLA, where she guided the Bruins to eight final-four appearances before taking a U.S. Women’s Soccer Technical Director position, overseeing U-14, U-15 and U-17 girls national teams, in 2011. Ellis was assistant coach on the on the 2008 and 2012 Olympic gold medal-winning squads under Pia Sundhage.

From 2014 SoccerAmerica.com interviews "Jill Ellis: Coaches must find their own voice" and "Players like to problem-solve"

• Put players in activities related to the game, something they’re going to have to solve. Players like to problem-solve.

• When you have a younger team, help them build relationships.

• Make an effort to see more and learn even more about teaching.  What I always appreciated about my dad is he never got stuck in the past. It was always you have to look at what’s around you.