El Trafico IV: Zlatan shows up with his Ferrari 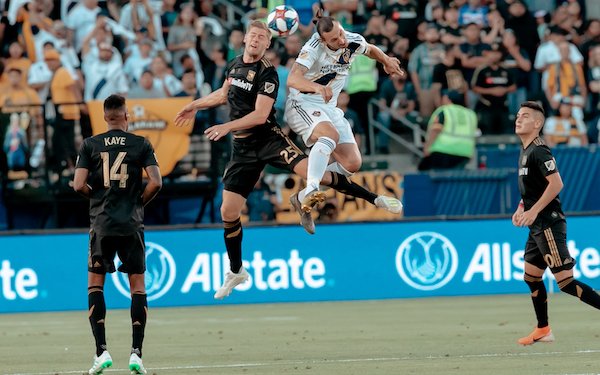 After comparing himself to "a Ferrari among Fiats" in the ranking of MLS's best players, Zlatan Ibrahimovic went out and backed up his words with a natural hat trick -- goals with his right foot and left foot and head -- in the LA Galaxy's biggest win of the season, a 3-2 victory over runaway MLS leader LAFC.

In an interview with ESPN, Ibrahimovic was asked about LAFC star Carlos Vela and said he was still, at 37, "by far" the best player in MLS.

It didn't look too good for Ibrahimovic when Vela scored on a penalty kick in the 4th minute for his 20th goal in 21 games -- the quickest a player has hit the 20-goal mark in MLS history.

But four minutes later, Ibrahimovic took a pass from 17-year-old Julian Araujo, chested the ball down, chipped it over his shoulder to himself and beat two defenders before firing the ball past LAFC goalie Tyler Miller.

In the second half, he scored two more goals as the Galaxy pulled away and took a 3-1 lead. A second goal by Vela in stoppage time made the final score 3-2, but there was no doubt who was the better player on Friday night.

"I have a lot of respect for Vela,"  Ibrahimovic said after the game. "He is a good player, but you did one mistake, you compared him to me. That was your biggest mistake."

And Vela's opinion? “Look, to compare me to Zlatan overall is an insult to him," he said afterwards. "But right now, in terms of stats and regardless of age. I’m better than Zlatan.”

“When you play a rival like that in a full stadium – the atmosphere is nice – I get pumped up," Ibrahimovic said on ESPN after the game. "I get adrenaline for these games. This is considered the biggest game in the league, so the biggest star needs to show up in the biggest game.”

The victory followed a 3-1 loss at home to the San Jose Earthquakes in which the Galaxy was outshot 32-5 (16-1 on shots on goal). It was a night-and-day difference in terms of intensity from the Galaxy.

“Overall, their intensity took us out of our game,” LAFC coach Bob Bradley said. “In those ways, we weren’t good in any part of the game. Our passing was nowhere near good enough, but the intensity changed the game in that regard and we didn’t deal well with it, which you expect in a derby match.”

LAFC suffered only its third loss in 21 games and had its lead in the Supporters' Shield race and Western Conference reduced to nine points.

“There are times [when] you play against certain teams there’s a guy with a strong personality,” Bradley said. “We’ve got to be able to have a way to take our football and make it so good and so strong that we don’t at the end of the day have to deal with all sorts of questions about him.”