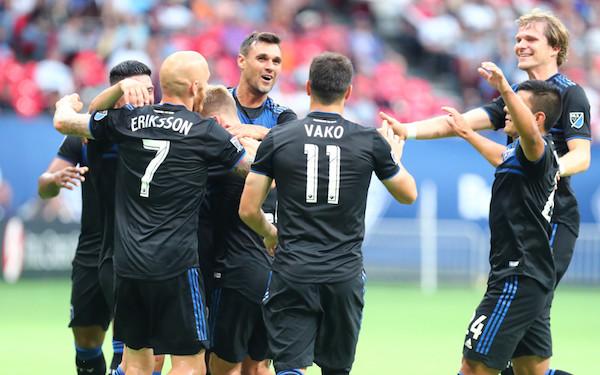 One day, you'd imagine, San Jose Earthquakes players will drop from exhaustion after all the marking they do to harass their opponents.

But until then, they are now the most feared road team in MLS.

Last week, they played at the LA Galaxy, gave up an early goal but completely dominated the game after that and won, 3-1.

On Saturday night, it was the exact same thing. San Jose came into Vancouver and trailed the 'Caps on a Doneil Henry goal in the 7th minute but won going away, getting goals from Vako, Chris Wondolowski and Magnus Eriksson in another 3-1 win.

The man-to-man marking instituted by first-year coach Matias Almeyda has paid off in tons of opportunities for the Quakes. They outshot the Galaxy, 32-5, and Vancouver, 32-6, to set an MLS record for shots in back-to-back games (64). They've fired off 25 or more shots in their last three games on the road after never previously doing that in their history.

The Quakes came into BC Place with one win in 12 games against the Whitecaps on the road.

"I think we've struggled in a lot of places away," said Shea Salinas, "but this year we have a confidence about us that we play the same at home as we do away. We came in here tonight knowing that Vancouver is a tough team and thinking that they should have more points than they do. We didn't take them lightly and we were able to come out of here with three points. It was great for us."

The Quakes lost their first four games under Almeyda, extending their winless streak dating back to 2018 to 12 games (11 losses and one tie) but since they've gone 10-3-4 and sit in fifth place in the Western Conference.

With a pair of matches against Colorado and one each against Columbus and Sporting KC -- all teams with losing records -- over the next three weeks, you could see the Quakes climbing as high as second place by the time they head to runaway Supporters' Shield leader LAFC Aug. 21 for the biggest test of "Almeyda Ball."

"We knew this was going to be a process," said the Argentine. "Every process requires time. First, we had to change a mentality, and then we had to install a system of play and demonstrate that everyone on the team is capable of doing it. That is why I took on this challenge when I had to options to go somewhere else. I chose this group because I studied them and knew they had a lot more to give."

The most amazing part to the Quakes' turnaround is that Almeyda did not blow up the roster. Only three starters against Vancouver -- goalkeeper Daniel Vega, midfielder Judson and winger Cristian Espinoza -- weren't with the team in 2018.

"He could have come in, and just totally cleaned house and change personnel - and he didn't do that," said Salinas, who is in his 10th season with the Quakes. "So that, as a player, that gives you confidence that you're wanted - and even after the first four games, after losing those four games, he said this is my group of guys, this team can win games, and it's been awesome to see that belief turn into reality."