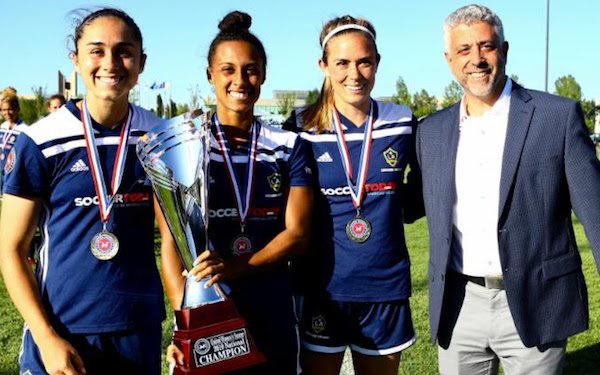 Stanford star Catarina Macario, who is awaiting U.S. citizenship before being able to represent the USA internationally, scored the game-winning goal in the 72nd minute -- her third goal of the final four -- to give LA Galaxy OC the 2019 UWS championship with a 1-0 win over Calgary Foothills WFC in the final at Mount Royal University.

The win was LA Galaxy OC's first over Calgary in five games over the past two seasons. It joins the Houston Aces (2018), Grand Rapids FC (2017) and Santa Clarita Blue Heat  (2016) as UWS national champions.

Macario, the 2018 Hermann Trophy winner as a sophomore, gave the Calgary defense fits all game. She had hit the crossbar in the 59th minute.

"We're obviously very, very excited," said LA head coach Scott Juniper. "Everyone has worked so hard from top to bottom at our club. [LA Galaxy OC Director of Operations] Tim Woodcock had a big vision of what we could build and he's given us the tools and the team to do it. I'm so excited for the club and for our finish as national champions this year."

LA Galaxy OC, which has an affiliate program with the MLS club, has boys and girls programs as well as teams in the UWS and UPSL.