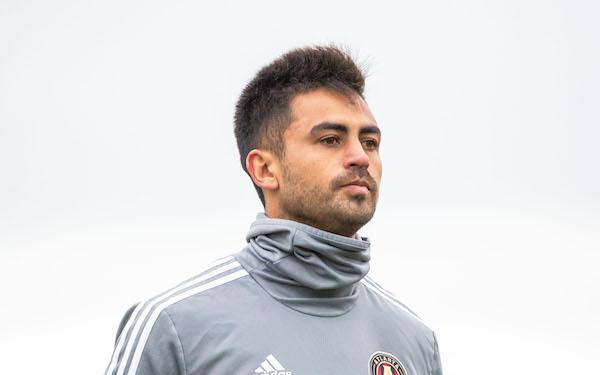 It has not been the season Pity Martinez hoped to have when he joined Atlanta United from River Plate, which he helped win the 2018 Libertadores Cup, capturing the Rey de America award as the best player playing in the Americas.

It wasn't until Atlanta United's 10th game in the 2019 MLS season that he scored a goal, and it wasn't until the 13th game that he had an assist.

His poor form meant that he wasn't picked to represent Argentina at the 2019 Copa America, and it continued this summer, resulting in Atlanta United coach Frank de Boer, forced to adjust his formation because of a rash of injuries at the outside back positions, dropping the 26-year-old Martinez, the most expensive signing in MLS's history, from the starting lineup.

The goal Martinez scored and assist he created in the dying minutes of Sunday's 2-0 win over D.C. United won't erase what's happened and they don't necessarily mean his role will change.

“I always want to play," Martinez said afterward. "I want to play every game. I train and go to the club every day to get better and play every game. It’s been my turn to be on the bench. It’s a coach’s decision. I can just give my best every time I’m called on to enter and try to earn my spot back.”

For now, Brandon Vazquez, a 20-year-old Mexican-American in his third season with Atlanta United, is starting up front with Josef Martinez. He didn't start his first game until June 26 but has started five of the last seven games, including the 4-0 win over Houston on Wednesday when he scored his second goal.

“I didn’t have a reason to change Vazquez," said de Boer. "I think he did a great job. [For the] first 50-60 minutes, he played really well. Then, you saw him lose the ball easily two or three times, and you saw  he was really tired. He made so many unselfish runs. He won so many duels that we could play on or heading or controlling and laying the ball back. I was really pleased with his performance."

The irony was that Pity Martinez scored on a header off a pass from Darlington Nagbe -- just what Vazquez was in the lineup for until de Boer subbed him off.

"This is the reaction you want, of course, from somebody who always played," said de Boer. "He was aggressive. He was sharp [and] fantastic [and this is] what he showed today. That gives him confidence. That gives everybody confidence. This is what we want to see from everybody, of course.”

Martinez's performance was a boost to his teammates.

“It feels good," said Julian Gressel, "but we have all the confidence in him. It does not really change things for us, especially not for me. I know what he can do, and it is probably good for him to kind of get that monkey off his back a little. I am sure he was not happy sitting on the bench but comes in and gets a goal and an assist, so not a bad night for him."

Gressel added that Martinez can be just as big a star as Miguel Almiron was in his two seasons in Atlanta before joining Newcastle United.

"He is just going to have to keep working," he said, "working within the team, getting adjusted to things, and then, I am sure, everybody will see what he can really do.”