Only seven players in U.S. women's soccer history have scored 100 goals, and few were as efficient as Tiffeny Milbrett, who scored exactly 100 goals in 206 appearances. Among those goals was the gamewinner in the first Olympic women's soccer final in 1996 and the first of two tying goals in the back-and-forth 1999 World Cup quarterfinal against Germany. The Hall of Famer also was one of the more successful women's soccer players in carrying over her national team success to the professional level, scoring at will for the WUSA's New York Power and earning league MVP honors in 2001 -- the only U.S. player to do so in either the WUSA or WPS. She continued to play top-level club soccer through 2010, scoring 10 goals over two seasons and winning a WPS championship with FC Gold Pride. She has spent the 2010s coaching youth soccer and is starting a new job as director of coach and player development at Tampa Bay United Rowdies, one of the few U.S. clubs with teams in both the Development Academy (boys) and the ECNL (boys and girls). 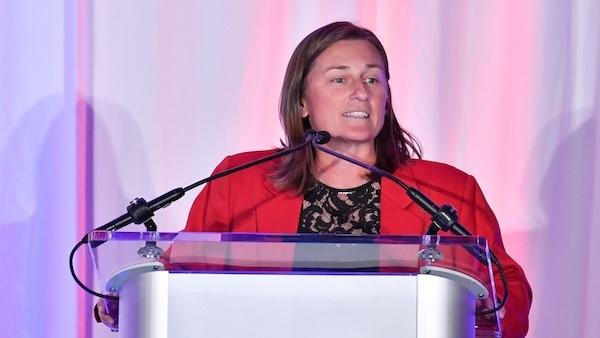 SOCCER AMERICA: Seems like it’s not a coincidence that two of the players from your era who have gone into coaching, you and Shannon MacMillan, both played at Portland, where Clive Charles had a big influence on people.

TIFFENY MILBRETT: Clive always said he felt someday I was going to be a great coach -- not saying I am, by any means. When you’re a little younger and every waking day is still being occupied by being a player, you don't really think about those things, especially when you have the potential for a very long playing career.

I just always thought it was very interesting that I had one of my mentors see something in me and had the opinion that I was going to be a coach someday.

MILBRETT: I think it’s not a simple answer. No. 1, it’s what you have to want for your career. It has to make sense for you as a passion to be moving forward. A career is the most important thing for me, whether it was as a player or continuing to work forever. It is not me to sit home.

It’s also an individual thing for me where I want to reach goals and aspirations of becoming a good coach and reaching really high levels for coaching. It's a no-brainer that I want this as my career, so it is an absolute priority.

[Men] always know that their priority is a career. In general, more women have taken a backseat to making a career their priority. I think it's changing, but that probably could be part of an answer to why there haven't been more female coaches.

But even having had the opportunity my most recent 10 years as a coach, you have to fight for your opportunities as well in a typically male-dominated environment and profession. Sometimes when you are the more qualified applicant, you still are fighting a male-dominated mindset, so sometimes those appointments go to the men.

So No. 1, it does start with an individual choice to make it your priority, and I think more women should do that, but who am I to say what they should do with their life. And then No. 2 is to fight your way to a position that typically has gone to the male gender. 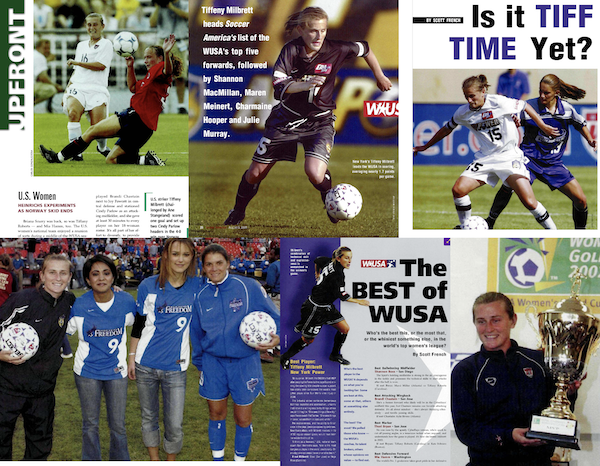 SA: Has the environment for young players today improved since your youth career, or is it worse?

SA: You were one of the most consistent finishers the U.S. women’s team has had. As U.S. Soccer and other groups try to emphasize possession, have we forgotten to teach the finishing skills that you had?

MILBRETT: It’s an interesting question. What I would say, being around the game as long as I have, we have this overcoaching where we've stifled the surprise element of the game. There’s a lot that gets you to the point of being in a shooting position.

I think it’s secondary to what the main issue is -- there’s way too much overcoaching, there's way too much emphasis on passing in the attack, and in the final third, there’s way too much trying to restrict players and not being OK with them having a surprise element to their game to try half-chances, to try surprising moments on the ball 1v1. That needs to be given back to the players -- if you want an increase in goals, you want to have an increase in opportunities that players have to shoot.

We need to continue to stoke the individuality, the surprise, the attacking 1v1 whether it works out or not. More times than not, it’s not going to work, but the moment it does, there you go -- you've just created another opportunity on goal.

SA: Who is a good role model for young attackers in today’s game?

MILBRETT: Megan Rapinoe seems to be the one that displays the 1v1 surprise, the "I’m gonna do what I wanna do, I'm gonna do what my instincts tell me to do." She seems like the player who is the most free to try to create.

In general, though, [it's] the men’s side that shows those players who have that attacking freedom, especially in the final third. My belief is that, for some reason, the men’s players in the rest of the world are given the right to be themselves, to be creative, and I think you can see that reflected when you watch the games week-in and week-out.

SA: Are you moving to Tampa Bay for the weather, or is there something about Rowdies United that appealed to you?

MILBRETT: It has nothing to do with the weather! I’m a Pacific Northwest girl through and through -- cool, 72 degrees, mild, nothing to hot -- that's in my blood. Going to Tampa, the only strike is going to be the weather and how hot and humid I am.

It's a career choice and an incredible opportunity to work at Tampa Bay United Rowdies youth club and be the head director of coach and player development of the club, male and female. I'm looking forward to this next step. I’m second in charge for the technical side at the club. So it is 100% career move and opportunity.

SA: You’re going to a club that has Development Academy and ECNL. Is that tricky from a political standpoint?

MILBRETT: From a club perspective, we’re fortunate to have all those platforms. When you have that, there’s no politics for us in the sense that when you’re a club that can offer those kinds of platforms, you feel like you can service more. So we feel pretty fortunate to have that. Obviously, we’re very aware of the politics and struggle between those two entities, but our job isn't to fight the politics. Our job is to find the right environment for as many of our players as possible. 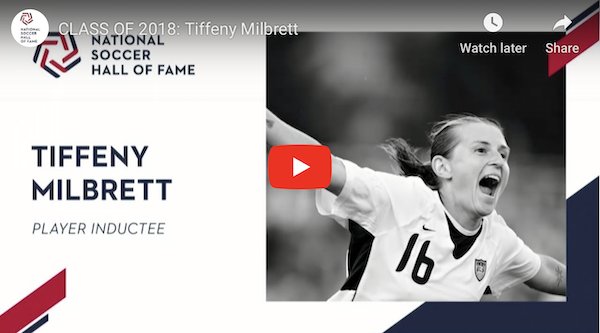 MILBRETT: I think more and more. Usually it’s the parents that remember being able to watch our teams play. That’s the same age range. Then what happens is, these players now become really heavily involved in doing their research. They’ll watch videos, they’ll go on YouTube. It's really cool -- the players take it on themselves to go back and watch me playing.

SA: The U.S. women's youth teams have struggled in international tournaments in recent years. Is that cause for concern, or do you think the youth system is still producing the players needed to stay ahead of France, England and everyone else?

MILBRETT: I think it’s more along your latter point. Just from seeing it and being completely immersed in the youth game the whole decade now -- we’re not servicing our soccer players correctly in their developmental journey. Too much emphasis has been placed on sheer winning. The sub-reason for that is that, obviously, clubs are a business, and parents are your customer. You have parents who may not fully understand what it takes to create and develop a player to their soccer potential and maximum. That takes building week-in and week-out for years and years. We have parents who may not understand the results of that, but they can understand a win or a loss or a tie.

We’ve been in this culture too long where, in my opinion, the parents have driven the business of the club. They can choose to stay, they can choose to leave -- which they have the full right to. My problem is that what they have been measuring and valuing is the wrong thing -- the wins and losses vs. the pure developmental piece. Clubs have had to focus on winning vs. focus on what they need to do, which is build the game of soccer, age-appropriately for many years.

I think we’re not developing players the way we need to in the youth. And that's why we're struggling.

SA: Who of your old teammates do you think needs to get up off the couch and come out and coach with you?

MILBRETT: I don’t have any one particular name in mind, but I just think it’s the person who, again, wants to make it their career, wants to heavily invest in their next journey of utilizing their experiences, their soccer acumen. I know plenty of players, ex-teammates, who have way more experience than most of these coaches out there. I don't mean any disrespect to many of these coaches out there. But the difference between what you've experienced as a player is invaluable.

The best player doesn't necessarily make the best coach. But I would rather be coached by someone who knows the game, who has experienced the game, than somebody who hasn't. Then it would be my ex-teammates' jobs to be building and honing their skills in the different arena that is coaching.

But the experience, the background, especially in the highest level -- there's no substitute for that. And that needs to be respected. Then you're on your journey to build yourself up as a coach, because it's a completely different hat than being a player.