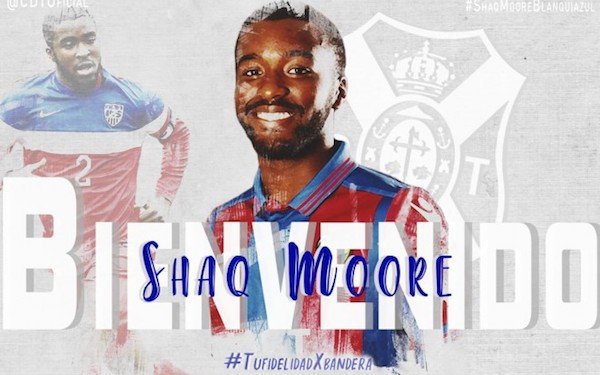 Shaq Moore is on the move again in Spain, joining second division Tenerife.

Moore, who earned five caps for the USA in 2018, signed a three-year contract with the Canary Islands team.

Tenerife finished 16th in the 22-team second division in 2019. Its last appearance in La Liga was in 2010 when it was relegated after one season. It dropped to the third tier the next season but has played in the second division since 2013.

It's been a roller-coaster ride for the 22-year-old Moore, who spent the 2017-18 season on loan from La Liga's Levante to second-tier club Reus until he was released when it could not pay him.

But instead of returning to Levante, for which he played in 2017-18, he headed to Atletico Levante, Levante's farm team in the third-tier Segunda División B, where he spent his first two seasons in Spain.

Moore and his teammates at Reus took their protest over unpaid salaries for the three previous months to the field, huddling at the start of a match last December. Moore and four other players later rescinded their contracts with Reus.

It was the second time Moore left a Spanish club because of its financial problems. He moved to Spain in 2015 after captaining the USA at the Under-20 World Cup in New Zealand, but had to leave his first club, Huracan Valencia, after it stopped paying its players