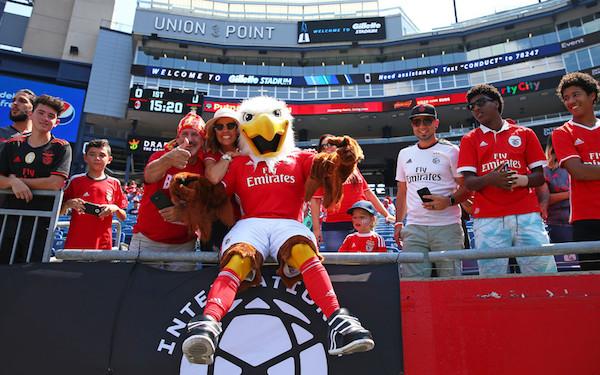 The International Champions Cup, the annual series of pre-season matches pitting some of the world's best clubs against other, wrapped up its U.S. stage on Sunday when Portugal's Benfica beat Italy's AC Milan, 1-0, to sweep all three games.

Like many games in this year's International Champions Cup, the game was played in hot weather and drew a disappointing crowd. Gillette Stadium was less than half filled with 27,585 fans on hand, the majority pro-Benfiquista, reflecting the strong Portuguese influence in southeastern Massachusetts.

Attendance for the 11 ICC matches played in the United States averaged 29,883 fans, down almost 35 percent from 2018 and more than 47 percent from the tournament high in 2016.

Manchester United and Barcelona have been two of the best supported teams on the ICC circuit, but they did not take part in the U.S. portion of the tournament this summer.

Manchester United played its ICC matches in Singapore and China and will play its final match against AC Milan on Saturday in Cardiff. Barcelona will be heading to the United States in August to face Napoli in a new La Liga-Serie A Cup organized by Revelent Sports Group, the ICC promoter. With the games scheduled for Michigan Stadium in Ann Arbor and Hard Rock Stadium, north of Miami, they should draw big crowds.

Liverpool, the reigning UEFA Champions League champion, went out on its own and promoted a three-game series of matches at Notre Dame, Fenway Park and Yankee Stadium, drawing more than 30,000 fans for each game.

Roma had to pull out because of its involvement in Europa League qualifying. Its replacement, Fiorentina, now owned by Rocco Commisso, drew the tournament's two lowest crowds for games against Guadalajara (10,062) and Benfica (12,141) though it's hard to imagine the games with Roma on the card would have drawn significantly more fans.

All three Guadalajara games game drew less than 16,000 fans. The Chivas match against Benfica attracted a crowd of 15,724 fans at Levi's Stadium, in Santa Clara, California, where ICC games the last three years drew crowds of 30,758, 65,109 and 51,391. The move to Globe Life Park, home of the baseball Texas Rangers, turned out to be a bust as just 12,467 fans showed up for Chivas' game against Atletico Madrid.