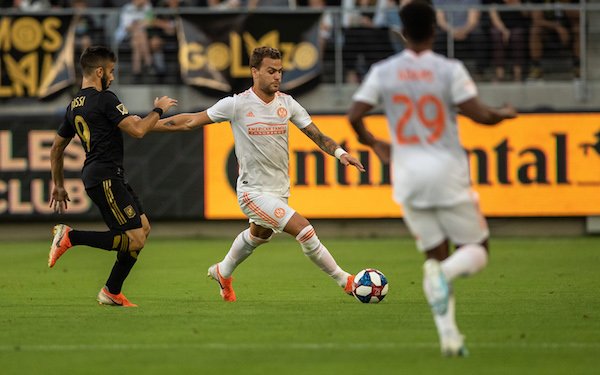 Heading into the 2019 MLS All-Star Game break, Atlanta United is second place in the Eastern Conference, the same position it finished in 2018 when it went on to win MLS Cup in its second season.

But comparisons between the two teams end there. In 2018, the Five Stripes lost seven games all season, losing out in the Supporters' Shield race to the New York Red Bulls on the final day of the season. In 2019, they've already lost nine games, including six in a row on the road following their 4-3 loss at LAFC on Friday night.

In 2018, the Five Stripes lost seven games all season, losing out in the Supporters' Shield race to the New York Red Bulls on the final day of the season. In 2019, they've already lost nine games, including six in a row on the road following their 4-3 loss at LAFC on Friday night.

The look of the team has altered with a change in coaches, and the mood around the team is decidedly different since Frank de Boer replaced Tata Martinez.

Much of the attention has focused on de Boer's relationship with struggling star Pity Martinez, who has been critical of de Boer in the Argentine press.

But two other Argentines, third-year center back Leandro Gonzalez Pirez and second-year midfielder Ezequiel Barco, spoke out about the situation with reporters on Monday in Orlando, where they are preparing for Wednesday's MLS All-Star Game against Atletico Madrid.

Gonzalez Pirez said the transition from fellow Argentine Martino to Dutchman de Boer has been hard.

“Two years of playing the same way, which in return gave you results," he said. "Coming out as champions, winning the league in a deserving manner. When there was no reason to change, things changed. But we’re professionals, we have to adapt to what the coach wants and what the sporting director [Carlos Bocanegra] wants and try to do things in the best possible manner because we share the same objective.”

What Gonzalez Pirez doesn't like is the new defense-first approach, something he says needs to change

“If you notice, we aren’t a team that’s known to play defensively, but we were a team that scored the most goals and it made a difference during games. The games now we approach them playing uphill and it’s very distinct to the way we played last year, and we’re not pleased with that. So, it’s something that we need change to go back to feeling that same sensation when we were a team that was really strong offensively.”

Barco, who made his first appearance since early May in the 4-3 loss at LAFC, coming on for Martinez in the second half, said the transition has been challenging but expressed support for de Boer's demands.

"Frank came here with a plan that’s we’re trying to get used to," said Barco, who was first away with Argentina at the U-20 World Cup and then was injured. "We’re applying it well on the field if you consider where we’re at in the standings, so we have to continue adapting and trusting what the coach asks from us.”