Jill Ellis: 'The timing is right to move on' 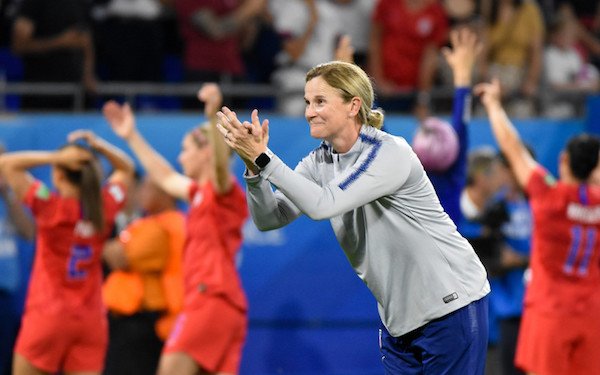 In 2014, she took the head coaching job of the U.S. women's national team -- a position she had been previously reluctant to accept on a full-time basis -- and all she did in five years was win two Women's World Cup championships.

She's the only coach to win two Women's World Cup titles and second coach to win back-to-back titles after Vittorio Pozzo led Italy to men's titles in 1934 and 1938.

Ellis announced on Tuesday that she will step down as head coach following the completion of the five-game Victory Tour in early October.

"When I accepted the head coaching position this was the timeframe I envisioned," the 52-year-old Ellis said in a statement. "The timing is right to move on and the program is positioned to remain at the pinnacle of women's soccer. Change is something I have always embraced in my life and for me and my family this is the right moment."

Ellis was born in Portsmouth, England, and moved in her teens to Virginia, where her father, John Ellis, was one of the first full-time coaches working in youth soccer in the 1980s.

She played soccer at William & Mary and then moved into college coaching, serving as an assistant at N.C. State, Maryland and Virginia before becoming the head coach at Illinois in 1997. After two seasons, she moved to UCLA, where she spent 12 seasons. The Bruins reached the final four seven years in a row (2003–2009) but didn't win a national title during her stay in Westwood.

Ellis had worked in the U.S. women's program before accepting a full-time position as the new youth national technical director in 2011. She had worked with the U.S. U-21s and U-20s and had been an assistant under Pia Sundhage from 2008-12 but did not apply for the national team job when Sundhage left after the USA won the 2012 Olympic gold-medal in London. But two years later, she took the job after Tom Sermanni was fired.

The USA won the Women's World Cup in Canada the next year and repeated this year when it beat the Netherlands, 2-0, in the final on July 7 in Lyon, France.

The only setback of Ellis' tenure came in 2016 when the USA, the three-time defending gold-medalist, lost to Sweden in a shootout in the quarterfinals of the Olympic women's soccer competition in Brazil.

That elimination prompted Ellis to shake up the national team in 2017 to the consternation of some veteran players. The team that beat the Netherlands included only five starters who started four years earlier when the USA beat Japan, 5-2, in the Women's World Cup final in Vancouver.

Tony Gustavsson, an assistant coach under Sundhage and Ellis, has also stepped down.

A replacement for Ellis will be made after U.S. Soccer hires a general manager.