England is known as the birthplace of organized soccer, but Jill Ellis  only got the opportunity to play organized soccer because she left England as a teenager in 1980 -- for the USA. 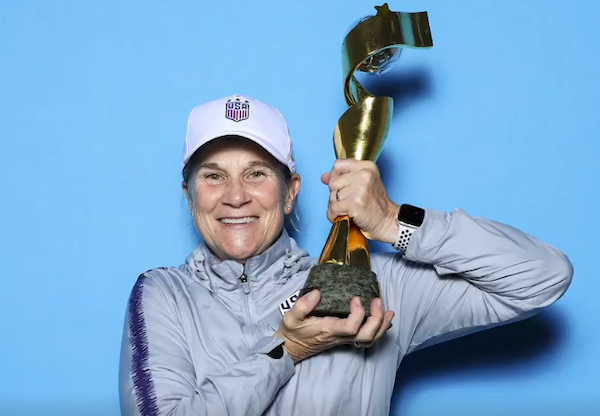 “If she had not gone to America, she probably would not have been in football,” Jill’s older brother, Paul, told The Guardian as Ellis guided the USA to the 2019 Women’s World Cup title. “Back then it was 100% a male game.”

Jill played soccer with Paul and his friends at recess in the schoolyard and kicked around in the backyard, often with a tennis ball.

"I think because a tennis ball didn't go over the fence as much," Ellis told me in an interview prior to guiding the USA to the 2015 World Cup title. "Playing with a small ball kept it down. And probably because my mom would be mad if we broke a window or something -- but we still did. Sometimes we'd have an old soccer ball. We'd go around the corner of streets and there'd be a wall and we'd play all those kinds of games against the wall."

Her father, John Ellis, in the 1950s was on track to a pro soccer career when compulsory military duty called. His father convinced him to make the military his vocation after John finished his first tour.

To John’s delight, the soccer continued. First because he played on the Royal Marines FA team. Later, while serving as a Royal Marine Commander, he worked in collaboration with the English FA in a "Hearts and Minds" campaign. He traveled, often bringing his family, to nations such as Hong Kong, Malaysia and Jamaica, to run soccer development projects.

After retiring from the military, John Ellis took his family to Virginia, where he was charged with creating youth programs modeled after the European club system.

"It wasn't until I came to the USA that I actually got to play on a team and officially got to suit up and be a part of something formal," Jill said.

Indeed, the soccer career of Jill Ellis is a remarkable story even if she hadn’t become the USA’s head coach in 2014 and won two Women’s World Cups.

She started coaching at her father’s camps at age 16. He’d have her get in front of 400 players “to teach principles of attack or defense,” he said. "To be a great coach, you have to be a great communicator. You have to have a vision and present ideas in an interesting way. "

She played college ball at William & Mary, and afterward had assistant coaching stints at North Carolina State – while earning a master’s degree – and the University of Maryland. She also coached youth soccer in Bethesda. "It was really good for me, as a head coach -- setting the philosophy for your team, making those decisions, dealing with parents, management," she said. "I tell young coaches, if you can have your own team and be an assistant on another team at the same time, you can learn so much."

In March 1997, she was hired to become head coach and launch the University of Illinois’ women’s varsity team, which took the field that August. Two years later, she became UCLA head coach and started coaching U.S. youth national teams.

Her announcement on Tuesday that she was stepping down as USA head coach coincided with her two-decade anniversary with U.S. Soccer, with which she became full-time in 2011 when appointed U.S. Soccer Women's Development Director, overseeing U-14, U-15 and U-17 girls national teams. She held that position until becoming USA head coach in 2014. 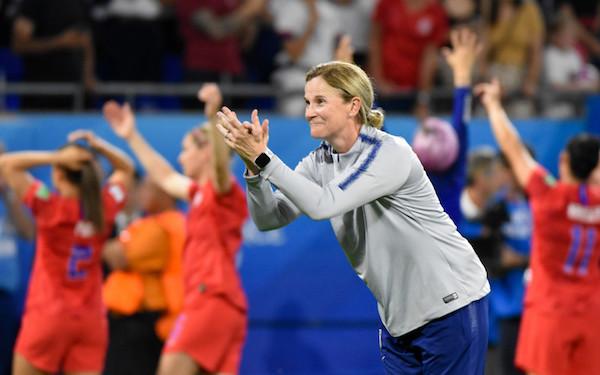 Ellis' service for U.S. Soccer included coaching the USA at the U-20 World Cup in 2010, and assistant coach to Pia Sundhage’s Olympic gold medal teams of 2008 and 2012.

Upon announcing that she would leave the head coach position after the USA’s Victory Tour, Ellis said, “I would say even when I started this job, I kind of felt that this was not a job that someone sits in for 10 years. I think change is good.”

U.S. Soccer says that it will soon hire a General Manager for the U.S. women's national team and start a search for Ellis’ replacement. (If you’re keeping track, U.S. Soccer has about 15 full-time positions to fill in the national team coaches and administration departments, based on the Staff Directory in its 2019 Media Guide and recent personnel changes.)

Ellis’ team dominated the 2019 Women’s World Cup so emphatically that the gap between the USA and the contenders in France looked wider than it was two decades ago. After years of hearing constantly about the rest of the world catching up – the U.S. women demonstrated that the American system has kept progressing as well.

“We’ve got to always remember where the pipeline comes from,” Ellis said. “We get to see this snapshot of this incredibly talented group of players going out to win a World Cup. But we have to remember where those players come from.”

College soccer with its Title IX boost has played a profound role in American women’s soccer. Scholarship-driven university soccer may be uniquely American, but it produces a player pool for the women’s national team that every other national coach in the world would envy. American youth soccer may be an alphabet soup of organizations, but it has spawned many of the world's best women's players.

“We must always remind ourselves, remind the Federation, that the youth piece is incredibly important,” Ellis said.

Ellis had been asked what advice she would give U.S. Soccer going forward.

“Since I’ve been aboard,” she said, “there has been much more financial investment and infrastructure in terms of youth national teams. But it’s not just about that.

“It’s about the community as a whole. Making sure we very much feel we are a part of the whole soccer community -- and it’s not just about elite players at national team level.

“Making sure we have the accessibility, the resources and funding to promote the game. The younger level is our life source.”

Ellis, besides making history as the first coach to win two straight Women’s World Cups, has this background:

• The immigrant soccer experience.
• The mainstream American youth soccer experience – as a player and coach.
• She played and coached college soccer. She started a college program and head-coached an NCAA national power.
• Ellis coached at the various youth national team age groups.
• She orchestrated what proved to be an excellent coaching staff – a group with various soccer backgrounds, domestically and internationally.

In 2020, Ellis will serve as “U.S. Soccer Ambassador.” That position, says the Federation press release, “will include representing the Federation at various events and speaking engagements.”

Even better would be if Ellis played a major role helping plan and guide the future of the U.S. women's and girls national team program. Otherwise, who else among U.S. Soccer leadership has as much insight and experience, from the highest level to college and youth ball, as Jill Ellis?