The USA opened its Victory Tour with a 3-0 win over Ireland before a crowd of 37,040 fans at the Rose Bowl. Three first-half goals allowed the world champions to take control and go to its bench in the second half. The game had very much the feel of a friendly with only five fouls between the two teams. 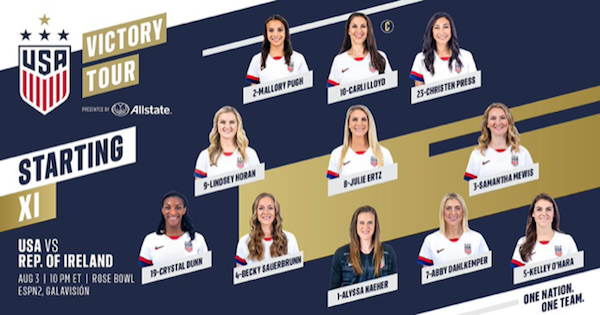 The outside backs, Kelley O'Hara and Crystal Dunn, set the tone for the match with runs deep into the Irish half. Dunn had plenty of opportunities to show off her dribbling skills on the left wing. O'Hara set up Carli Lloyd for the game's third goal with an excellent cross. Becky Sauerbrunn and Abby Dahlkemper snuffed the rare times when the Irish tried to break into the U.S. half.

Samantha Mewis was everywhere in midfield in the first half, helping set up the first goal and delivering a low ball to the left side, where she found Lindsey Horan for the second goal. Mewis had to leave the game, though, after taking an elbow from Niamh Fahey to the nose in the 56th minute. Julie Ertz did much of the playmaking from a deep-lying position.

Megan Rapinoe and Alex Morgan sat out the game due to injuries, allowing Christen Press and Carli Lloyd to get starts. Tobin Heath, the third starting forward in the Women's World Cup final, was supposed to begin the game on the bench but started and scored the game's first goal off a Press cross after Mallory Pugh was injured in warm-ups. Lloyd missed an early chance with a shot over the crossbar but atoned for that when she scored the game's best goal, leaping over two defenders to complete the first-half scoring on a header off O'Hara's cross.

U.S. coach Jill Ellis made three substitutions at halftime: Jessica McDonald for Heath, Emily Sonnett for O'Hara and Ashlyn Harris for Alyssa Naeher. The player the Rose Bowl fans wanted to see was Rose Lavelle, who was the USA's sixth and final sub in the 62nd minute.