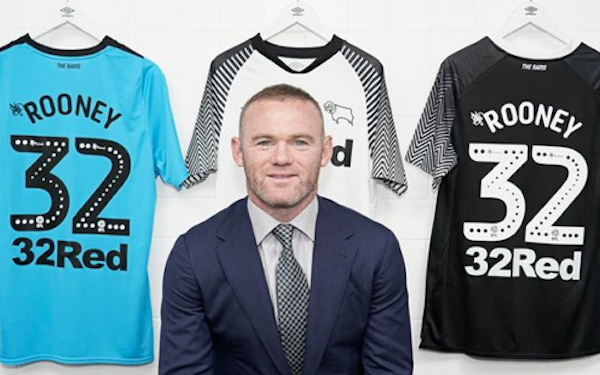 D.C. United confirmed on Tuesday that English star Wayne Rooney will be leaving at the end of the 2019 season to join Derby County of the English Championship as a player-coach.

Rooney will join the Rams in January on an 18-month contract. His contract with D.C. United had two years left on it, but there will be no transfer fee involved in the deal. One of Rooney's goals is to move into coaching after he retires, and the move to Derby will allow him to work on his coaching license.

“I remain fully focused on giving my all for the team for the rest of this season and repaying the support shown by the Black-and-Red faithful by hopefully delivering an MLS Cup to Audi Field. My time in Major League Soccer is something I will always be proud of. The supporters in the Screaming Eagles, Barra Brava and District Ultras have made my time in America so enjoyable. While the decision to move home was a tough one, family is everything to us and we make this change to be closer to the ones we love back in England. The opportunity to go back home and start the next step of my career in coaching was the factor that made my mind up. I would like to thank everyone at D.C. United for the incredible support my family and I have received over my two seasons at the club.”

What's next for D.C. United?

Short term. Following up on its strong second-half run in 2018 after Rooney arrived from Everton, D.C United started out with a 7-3-1 record but has won just two of 13 games since then and sits in fourth place but will only a four-point lead over Toronto FC in eighth place and one extra game played. The top seven teams will make the playoffs.

Injuries to Russell Canouse (collapsed lung) and Chris Durkin (ankle injury) have left D.C. United thin in midfield, and it moved to Tuesday to get help with the acquisition of Brazilian Felipe from Vancouver. D.C. fans will know Felipe from his six seasons with the Eastern Conference's Montreal Impact and the New York Red Bulls.

A deal to bring Ola Kamara back to MLS is in the works and will likely be concluded before MLS's transfer window closes on Wednesday night. The Norwegian international scored 48 goals in three MLS seasons with Columbus and the LA Galaxy and but did not score in five games in China with Shenzhen.

Long term. First of all, D.C. United will have to decide what to do with Luciano Acosta, whose contract expires at the end of the 2019 season. A deal to move the Argentine playmaker to Paris St. Germain in January fell through.

Acosta thrived after Rooney arrived, earning MLS Best XI honors in 2018 with 10 goals and 17 assists, but his production has dropped in 2019. He has just five goals and two assists in 23 games and no goals or assists in United's last eight games when it has managed to scored just nine goals. He missed two games following a red card received in a match at FC Dallas.

the Washington Post's Steven Goff reported that D.C. United will hold talks next week with representatives of German star Mesut Ozil, who is out of favor at Arsenal under manager Unai Emery.

Since the MLS transfer window ends on Wednesday night, any deal with Ozil would likely be for the 2020 MLS season. Ozil, who turns 31 in October, started just 20 games in 2018-19, the fewest in his six seasons with the Gunners. He is under contract through the 2020-21 season.