Atlanta United moves into U.S. Open Cup final after being forced to improvise 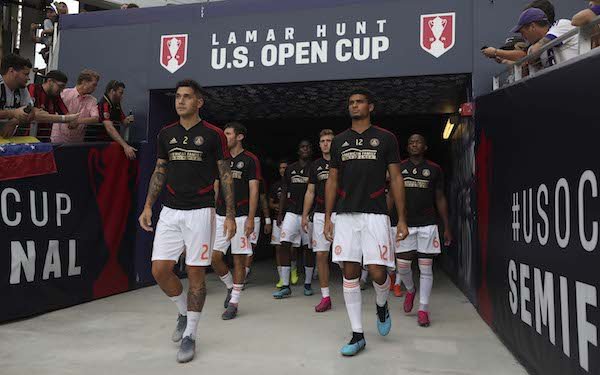 Atlanta United advanced to the Lamar Hunt U.S. Open Cup final for the first time when it beat Orlando City, 2-0, before 18,461 fans at Exploria Stadium, the third largest crowd ever to watch an Open Cup semifinal match.

The Five Stripes had to improvise up front when star Josef Martinez was injured in training on Monday. Brandon Vazquez is also sidelined and Hector Villalba is not ready to go 90 minutes so Atlanta United went without a true forward and started Ezequiel Barco and Pity Martinez up front.

“We had to react, of course, quickly," said Coach Frank de Boer, "so I didn’t have to think very long about it. For me, it was clear that we put Barco and Pity up front and then play the midfield that we did against Houston with Emerson [Hyndman], Eric [Remedi] and [Darlington] Nagbe.”

Atlanta got a goal from Remedi in the first half -- just his second in two seasons -- and another from Hyndman -- his first with Atlanta United -- in the second half.

"He scores a lot of our goals and he’s a big threat for the opposition," said Hyndman of Josef Martinez, whose consecutive game scoring streak hit nine games on Saturday, "so we had to step up tonight obviously in such a big game. I think a lot of our players did that and it was a team performance. A lot of hard work out there, especially the second half, but I thought we deserved it."

De Boer again liked the effort and concentration he got from his players.

“I think if you see the first half," he said, "we were much better and I think we could have punished them more than once."

Atlanta United moves into the final against the winner of Wednesday's semifinal match between Portland Timbers and Minnesota United. The final will be played at Mercedes-Benz Stadium on Aug. 27.