Everything is coming together for Minnesota United, U.S. Open Cup finalist and MLS's hottest team 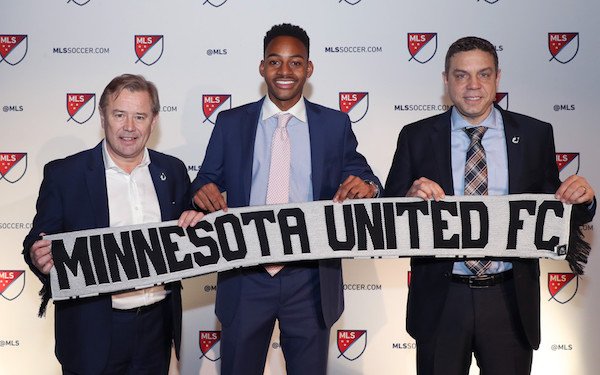 In its first two seasons in MLS, Minnesota United struggled.

The Loons finished 9th and 10th in the Western Conference and had the worst defense in MLS over the 2017 and 2018 seasons.

There was a lot of talk about whether head coach Adrian Heath and sporting director Manny Lagos would be fired.

But a month before the 2018 season ended, Chris Wright, who took over as CEO late in 2017, gave Heath and Lagos a pass. That proved to be the right move.

Minnesota United is the hottest team in MLS, one win away from winning the U.S. Open Cup and in second place in the Western Conference, unbeaten in its last seven league games. All this while playing at MLS's newest stadium, rocking Allianz Field.

On Wednesday night, the Loons beat the Portland Timbers, one of the most consistent teams in MLS, for the second time in four days, winning, 2-1, to advance to the 2019 Open Cup final on Aug. 27 at Atlanta United.

Heath and Lagos have been pulling all the right moves.

Heath stuck with Mason Toye after a rough rookie season, and the 20-year-old forward has emerged as one of the surprises of the 2019 MLS season. The former Indiana University star scored the winning goal on a breakaway in the 65th minute to break a 1-1 tie. It was Toye's sixth goal in 12 games in all competitions in 2019.

Heath said Toye was rewarded for his perseverance.

“It means that the kid's getting better," he said, "and if he keeps working hard, he’s still in the beginning of his development. But the thing about the kid is [that] he wants to be good and he’s prepared to put the hours in to try to make himself good. That’s why there’s not a person in the coaching staff who’s not absolutely delighted for him because nobody works harder at trying to be better than he does.”

Heath and Lagos rebuilt the Loons in the offseason. They started seven first-year players against Portland, including Finn Robin Lod, who was signed only a month ago.

“I thought considering that he’s not played much football," said Heath. "I thought he was outstanding. [He] got in great holes, he’s got great feet, really soft feet. [It] goes to him and you never feel as though he’s going to lose the ball."

On Wednesday, the last day before the MLS summer window closed, Minnesota United announced the signing of 18-year-old Uruguayan Thomas Chacon for a reported $3 million as its first Young Designated Player, the kind of move that puts the Loons in the class of MLS's most ambitious teams.

Heath said he always insisted he wanted the team to be judged by where it was three years into MLS.

"I actually think that we’ve made unbelievable progress," he said Wednesday night. "We keep adding. It’s a great day for the club. We’re going to the first final, we’ve added a young DP, paid a lot of money for a kid that we think is going to be outstanding for the future."

mls
1 comment about "Everything is coming together for Minnesota United, U.S. Open Cup finalist and MLS's hottest team".
Next story loading