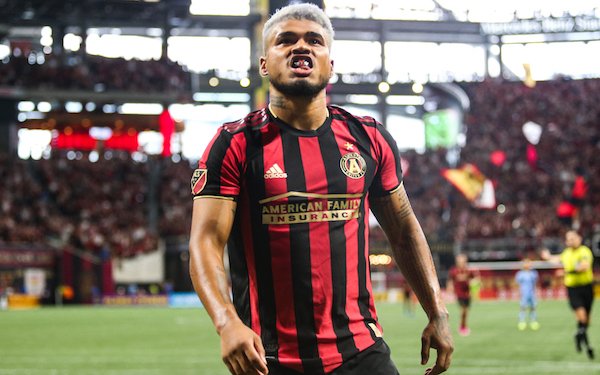 Josef Martinez, who set the MLS record for goals in a season in 2018, set two more records on Sunday when he scored both goals for Atlanta United in its 2-1 win over New York City FC.

Martinez, who had missed Atlanta's 2-0 win at Orlando City in the U.S. Open Cup semifinals on Tuesday and was doubtful for Sunday's game, set a league record by scoring in his 10th consecutive MLS match, breaking the record he shared with Portland's Diego Valeri.

Martinez is also MLS's all-time leading scorer over a three-season span with 70 goals in 76 games. He has nine games to extend the record. He shared the record of 68 goals with the Red Bulls' Bradley Wright-Phillips (2014-16).

Atlanta United coach Frank de Boer praised the 26-year-old Venezuelan for the energy he brings and how he inspires his teammates.

“He demands from other players that they have to give the best out of themselves," de Boer said. "He pushes them to the limit. That's fantastic to see. He pushes himself to the limit to score goals and is always eager to be there in front of the goal and score goals from his teammates. Sometimes he's angry about it when it's not going his way, but he keeps everybody awake.”

Martinez's single-season record of 31 goals set in 2018 is under threat, however. Carlos Vela scored on a penalty kick in LAFC's 4-2 win over the Red Bulls to take his total to 23 goals in 23 matches. LAFC has 10 games to play in the regular season.