The joys of picardia vs. the boredom of tactics

Diego Maradona has always known about soccer’s extra dimension. Even as a frighteningly young teenager -- he was only 15 when he made his debut at the top level of Argentine pro soccer -- he already knew, or he sensed, that there was more to the sport than tactics and training, more even than mastery of its impressive array of unique skills.

In that debut game of his -- way back in 1976 -- Maradona had been on the field for only a few minutes when he pulled off a perfect nutmeg against an opposing defender. A callow 15-year-old smoothly bamboozling an experienced pro!

I doubt any superstar has ever made his mark so quickly. Twenty years later Maradona, with that same combination of dazzling skill and impertinent trickery, led Argentina to World Cup glory.

He had a name for what he was doing. In 1980 -- he was still a teenager, but by then a regular on the Argentine national team -- he was asked for his views on an upcoming Argentina-West Germany game. He replied: “Ganaremos nosotros. Tenemos mas picardia.” We’ll win - we have more . . . well, more what?

The dictionary says picardia means craftiness or mischievousness or slyness. All of which suggest trickiness. I’ve discussed this word with many soccer people. And sooner or later we usually come round to agreeing that Maradona’s picardia is a combination of cleverness and sneakiness.

Of course, sneakiness implies a darker side. We saw that in 1986 when Maradona got away with the most infamous moment of trickery in the history of soccer -- his Hand-of-God goal against England. Then, as if Maradona felt obliged to atone for his cheating, within four minutes he scored one of the greatest of all World Cup goals.

The Hand-of-God will obviously not do as an example of the beauty of picardia -- and I’m looking for such an example because I have a bone to pick with IFAB and one of its latest rule changes -- I’ll come back to that shortly.

My favorite moment of picardia came in 1974, just before Maradona began his career. It came not from the Argentines, but from the Brazilians. That year’s World Cup featured both East and West Germany. Brazil ran into the East Germans in the second round. Brazil was playing well below its dynamic best, while the East Germans had proved themselves defensively solid and tremendously boring.

The game was still scoreless at the hour mark when Brazil earned a free kick directly in front of the East German goal, 22 yards out. The obvious candidate to take it was Roberto Rivelino, famous for his ability to bend his ferociously hit left-footed shots round the defensive wall. Rivelino lined up the shot. His teammate Jairzinho inserted himself between two defenders in the East German wall. As Rivelino struck the ball, Jairzinho threw himself forward to the ground, leaving a narrow gap between the two defenders. Rivelino’s shot was inch perfect, a thunderbolt that screamed through the gap and into the net. The goalkeeper stood motionless. In fact, the sheer audacity of the play seemed to have frozen the moment -- Jairzinho was still stretched out motionless on the ground in front of the wall, six defenders who, like their goalkeeper, were too stunned to even move. 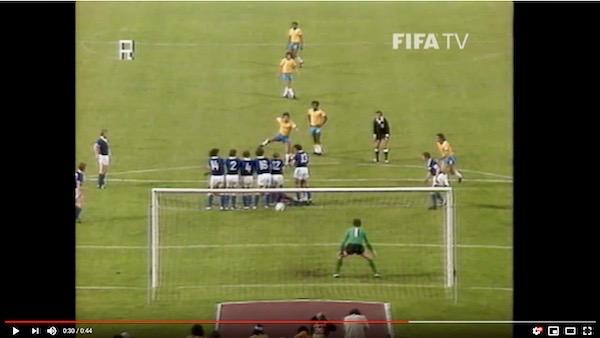 A few seconds of great soccer beauty, of pure picardian magic. This is the other dimension. It cannot be called tactics. It may or may not have been spontaneously improvised. It definitely called for perfection from Rivelino. It certainly involved trickery.

And I think it’s safe to say that it signed its own death warrant. I’ve never seen that play repeated. It immediately became too well-known. Defenders now knew they had to stop opponents from infiltrating the wall. Hence a great deal of pushing and shoving -- a repeat of the confrontations at corner kicks.

These are very difficult -- almost impossible -- situations for referees to solve. The stern lectures that they give the players are, frankly, a joke. The players know the rules, they know how they’re supposed to behave. But the pushing and holding continue, corner kick after corner kick, game after game, as do the pathetic referee warnings.

These melees are to be deplored, of course, because they mar the game -- “against the spirit of the game” IFAB now rightly proclaims. Of course, they also infringe the rules. Worse, they defy the rules. Ideally, referees should be issuing cards and awarding penalty kicks. But that hardly ever happens. If it did, there would no doubt be an outcry against the referees for being too harsh.

Up till now, soccer has decided to live with leniency and the oral-warning charade. Which is an accommodation, not a solution. Unable to come up with anything that will stop the corner-kick shenanigans, IFAB has decided that it can at least banish the problem at free kicks.

The rules now assert that attacking players will not be allowed to attempt to join the wall. They must stay at least one yard away from it. That should work, I think. A good idea in that it will get rid of ugly scenes that reflect badly on the game.

Which doesn’t alter the fact that this is a rule change with a hollow ring, because the very confrontations that it is formulated to eliminate at free kicks will continue unabated at corner kicks. No doubt IFAB -- and all referees -- would like to deal with corner kicks exactly as they now treat free kicks -- by telling attacking players to keep away.

But that they cannot do ... their own words rule it out. That is the bone I have to pick with IFAB. In explaining the reasons for the rule change, IFAB has this to say: “There is no legitimate tactical justification for attackers to be in the ‘wall’ ...” That consideration -- that attackers must not get too close to defenders -- could never be applied at corner kicks. Corner kicks, after all, are supposed to be a reward for attacking play, they are supposed to give the attacking team a good scoring chance. Plenty of “legitimate tactical justification” there.

I don’t believe that phrase has ever been used before in the rule book. I find it objectionable for a number of reasons. Not least because it anoints “legitimate tactics” as the most important aspect of the sport.

If you’re putting legitimate tactics to use, you’ll be OK. If not the ref will punish you. So I arrive back at Maradona’s picardia. Picardia cannot be defined as tactics, so out it goes. That wonderful Brazilian free kick goes too. The game moves ever more firmly away from the creativity of its players and into the minds of the coaches and their tedious tactical rigmaroles.

It moves from the beauty and freshness of spontaneous skilled trickery to the dreadful dullness of an X-and-0 diagram. That an official assist for this doleful descent into dreariness should come from IFAB, the self-appointed “Guardians of the Laws of the Game,” should not be a surprise to anyone familiar with the work of that vacuous group during the past few decades.

argentina, brazil
6 comments about "The joys of picardia vs. the boredom of tactics".
Read more comments >
Next story loading