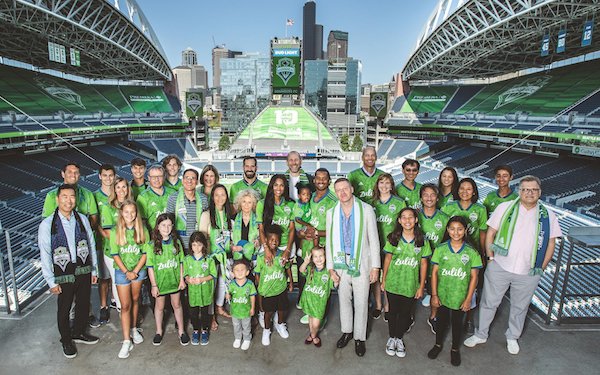 The Seattle Sounders unveiled 11 new families that are joining the MLS club's ownership group as the same time as the club's original majority owner, Joe Roth, announced his departure from the club.

All 11 families have direct ties to Seattle. They include Seattle Seahawks quarterback Russell Wilson, a six-time Pro Bowler and Super Bowl winner, and his wife, Grammy Award-winning music star Ciara, and hip hop star Macklemore and his wife Tricia Davis.

Former Fox Sports executive David Nathanson, who oversaw its national sports networks and move into soccer, and wife Sabina Nathanson are also part of the Sounders' new group of investors.

When the team was awarded an MLS franchise in 2007 and began play in 2009, Roth was the majority owner.

"When MLS gave me permission to look at the Pacific Northwest to start a soccer franchise, there was no question that Seattle was the place," said the Hollywood producer. "The last 10 years watching our Sounders grow with their incredible fan support beat any hit movie I ever created. I love the team, from the players to the staff, and most of all I love the fans. When they write the history book of soccer in America, it was Seattle that propelled our game into being perceived as a first-tier sport."