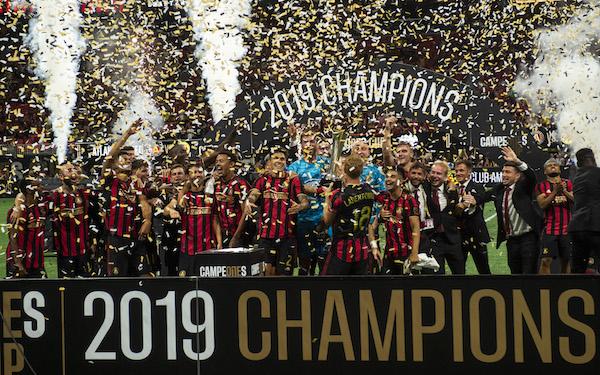 Atlanta United, the reigning MLS champion, rallied to defeat Mexico's Club America, 3-2, and win the 2019 Campeones Cup, the second-year competition pitting the MLS and Liga MX champions against each other.

The 40,128 fans at Mercedes-Benz Stadium watched the Five Stripes erase a 2-1 deficit in the second half with goals from Jeff Larentowicz on a deflection off an America defender and Josef Martinez from the penalty spot.

Late in the first half, Martinez had a chance to put Atlanta United ahead 2-1 but his penalty kick awarded on Video Review was saved by America keeper Oscar Jimenez.

Emerson Hyndman scored the opening goal in the fifth minute. Renato Ibarra equalized eight minutes, and America went ahead in the second half with a goal by Roger Martinez from close range off a corner kick.

Atlanta United showed off the depth that makes it a legitimate contender to repeat as MLS champion despite its early struggles. Coach Frank de Boer made five changes in the starting lineup from the team that beat NYCFC, 2-1, on Sunday. They included starting Alec Kann in goal, where he made four saves.

The title was the first for de Boer since he took over for Tata Martino.

“I'm very proud of what [we] showed today," he said, "because it was a difficult game. But if you see where we were at the beginning [of the season] and where we are right now, then we can say we made a major step forward. It's good for MLS and especially good for Atlanta United that we can compete against this kind of team.”

Tigres dominated Toronto FC, 3-1, to win the first edition of the Campeones Cup in 2018.