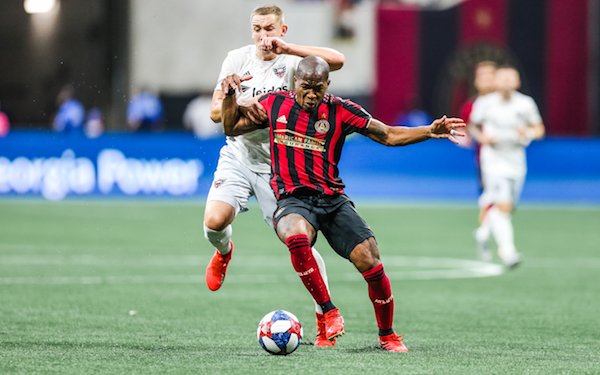 At the beginning of the season, it wasn't entirely clear if Darlington Nagbe would stay at Atlanta United.

Now, the 29-year-old Nagbe has been an essential part of the reigning MLS champion's recent return to form. Two days after the Five Stripes beat Club America, 3-2, head coach Frank de Boer described Nagbe's play as "phenomenal" and deserving of a call-up to the U.S. national team.

“My personal opinion is that if you see from the start [of the season], he's by far one of the best midfielders in the MLS,” De Boer said. “That's my opinion. But it's up to the coach of the national team to make his decision, and he has a different view right now.”

Nagbe was a regular on the U.S. national team under Bruce Arena in 2017 but since the USA failed to qualify for the 2018 World Cup, he has only played once, a 1-0 win over Paraguay under interim coach Dave Sarachan in March 2018.

How is nagbe still in this country?? Unless he doesn’t want to leave but man what a player.. I’m biased cause that’s my homie, but I don’t think anyone would disagree with how good he is! #topclass


Gregg Berhalter said he did not call up Nagbe for the January camp -- his first as national team coach -- because he needed rest after the 2018 season during which he suffered a serious groin injury and which went into December. And Berhalter said essentially the same thing in March when he didn't call Nagbe into camp for friendlies against Ecuador and Chile. Nagbe was on Berhalter's 40-player provisional roster for the Gold Cup but did not make the final roster.

Nagbe told Atlanta reporters that he understood Berhalter's decisions and was concentrating on his responsibilities with Atlanta United, which will seek its second trophy of the year on Aug. 27 when it hosts Minnesota United in the U.S. Open Cup final.

“I think if he plays like this," he said, "[Berhalter] will pay attention, that's for sure. Because how he's playing right now and against Club America was phenomenal.”