Can you be half a fan?

One of the strangest experiences I ever had as a soccer spectator was at a World Cup qualifying game at RFK Stadium (may the sporting gods rest its soul) between the USA and Guatemala in the fall of 2000. Directly behind me was a man with a flag for each country. Regardless of who was attacking, he cheered them on. When Brian McBride  scored the only goal of the game he went absolutely wild, waving the star-spangled banner and hollering on high.

It was not just a worthy attempt to display assimilation and prove that patriotism can transgress borders, just like people. It was also, in some respects, the perfect sporting experience. The fan had set out that morning to enjoy himself, and to celebrate whatever the outcome. I admired his defiance of the convention that a fan can only care about one team. You could also argue that he stressed the artificial premise of sport. This is not a real battle, it's mere entertainment.

I thought of the fan while debating my youngest daughter on our way into the Eintracht Frankfurt stadium this past weekend, for the team's opening Bundesliga game against Hoffenheim. She can't understand my vehement opposition to the very idea of half-and-half scarves -- those commemorative eyesores split down the middle between two competing teams on any given occasion. I argue in return that she cannot understand my resistance because she's too new to the idea of being a soccer fan. That, "in my day," the vendors would have been chased down the street and far out of town. 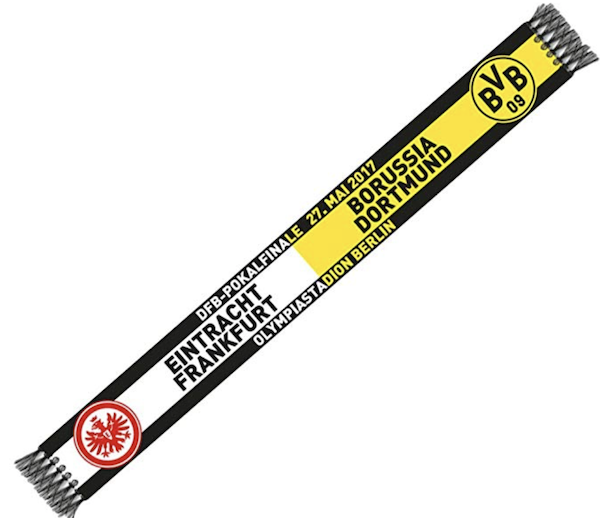 What exactly do you have against them? she pressed. She is part of a generation quite rightly not afraid to question her parents' Jurassic assumptions. And as with so many of the questions she's put to me down the years, I had difficulty finding an answer (it was certainly much harder than the question, "Why do you hate Coldplay?"). You know, it just seems wrong, I said. The whole point of going to the game is to support your team. Why would I want a scarf with the name and colors of a team on it with which I have no connection? That I may even profess to hate.

Yes, but if other fans just want a souvenir of a game they went to, what's wrong with that? This question broaches dangerous ground for men of a certain age (over 45) who need to be wary of becoming parodies of an oath-spitting curmudgeon, scorned and imitated by people with fresher thoughts and faces. If we condemn half-and-half scarves outright, we're going to be labeled intolerant. For the simple reason that we are being intolerant. So I answered the question with a question of my own. "Do you want Bratwurst or Rindswurst?"

Reflecting on my rhetorical defeat this morning, I thought of a different, but possibly no less convincing, approach to talking about these fabricated abominations. Let's compare half-and-half scarves to the grown man who turns up for a game, or any occasion at all, wearing his team's full uniform. That is, not just the jersey, but the shorts and the socks too. (There's a name for him in the UK that's not printable in a respectable publication like Soccer America, but google "full kit" and you'll find the correct terminology at Urban Dictionary.) Again, you might ask what's wrong with that, if that's what he wants to do? It's not illegal, and it's certainly not causing any harm.

It's just not done. Look, I hate to sound like someone who's a stickler for social norms, but please believe me, it's far beyond the pale. It's like going to meet the in-laws for the first time wearing a beer box cowboy hat. It's like going for a job interview on Wall Street and saying your biggest inspiration is Eugene V. Debs. It'd be like setting up a stand at the County Fair and challenging passers-by to pay a buck to explain the principles of neural science in 50 words or less. We have the freedom to do any or all of these things, but we generally don't.

"You always say there's too much pointless hate and toxicity among rival fans," ran another one of my daughter's annoyingly logical arguments. "At least the half-and-half scarf is promoting friendship rather than enmity." The U.S.-Guatemalan fan at RFK would probably have agreed. If half-and-half scarves had been around in 2000, he'd have wrapped one around his neck. I still love the memory of that guy and his unchecked determination to cheer for whoever the heck he wanted. And I still do not understand why anyone in the world would ever buy, wear or wave a half-and-half scarf.

international
12 comments about "Can you be half a fan?".
Read more comments >
Next story loading