A weekend with the VARmints

No apologies for returning, yet again, to this VAR business.

It is fast becoming a major talking point in the sport. Which is OK, I suppose. What is not so OK is that VAR has also become something of an obtrusive nuisance in the game.

I cling, somewhat uneasily now, to my original feeling that VAR must be a good thing for the sport. That it was the obvious answer to the problem posed by serious — i.e., game-changing -- refereeing errors that needed to be corrected immediately, while the game was still in progress.

VAR can do that. But I’m beginning to think that it does too much of it, and that too many of its decisions involve the nullifying of goals. In this column, just over a year ago, I pondered the possibility that VAR might have a built-in anti-goalscoring bias.

The games, or parts of games, that I watched this past Saturday in the English Premier League convince me: that possibility is nearing a probability.

These are the decisive VAR decisions that I watched on Saturday:

• Arsenal-Burnley 45th: “goal” by Arsenal’s Reiss Nelson nixed by VAR -- Nelson’s teammate Nacho Monreal was offside during the buildup (“his toe nail was offside” was the Guardian’s comment).

• Aston Villa-Bournemouth 48th: Aston Villa appeals for a penalty kick are thumbed down by VAR.

Four VAR interventions: three of them canceling “goals," one turning down a penalty kick — i.e. an opportunity to score. A thoroughly negative afternoon’s work for the VARmint fraternity.

But the negativity is not VAR’s fault. It is simply built into the system by the sport’s rules. Under those rules, a goal in soccer has to be scored, it cannot be awarded. Thus, while it is very easy for VAR to nix a goal, it is very difficult for VAR to create a goal. It can happen -- VAR can reinstate a goal that has been wrongly ruled out by the referee (quite probably because of a faulty offside call) but that is something that we do not see very often.

A more likely occurrence is for VAR to award a penalty kick — but that totally lacks the decisive impact of awarding a goal. Penalties can be missed, or saved. A week ago, VAR allowed ManCity’s Sergio Aguero to retake a penalty kick against West Ham. His first, and feeble, attempt had been saved, but VAR spotted encroachment by a West Ham player (he was the one to whack the ball away after the goalkeeper’s save), and Aguero scored from the retake. A VAR created goal, but I doubt we’ll be seeing a repeat of that sequence any time soon. 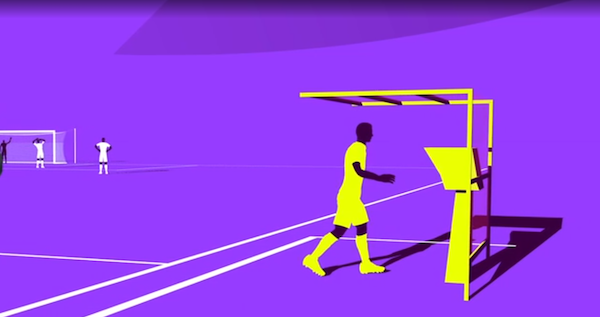 Inevitably, VAR’s impact will be felt more often, and much more dramatically, when it is wiping out a goal, when that annoyingly triumphant “NO GOAL” emblazons a stadium’s big screen.

It is going to be very difficult for VAR to escape the label of joy-killer, or at least party-pooper. Saturday’s Man City/Tottenham incident already mentioned provides an almost perfect example: An intense game between two of the EPL’s top teams is in added time, the score stands at 2-2, when Man City score a highly dramatic late winner. The stadium fans — this is ManCity’s Etihad — are roaring, the players’ on-field celebrations are wildly ecstatic, the television screen shows the score now at 3-2 ... But all that frenetic excitement is about to be blown away. The referee is getting the news from VAR that Laporte had handled the ball immediately before Gabriel Jesus scored.

The offense was accidental for sure, and minimal -- some press reports insisted that the ball had merely “brushed” Laporte’s arm -- but no matter. VAR had revealed a hand-ball offense, so the goal must be canceled. The game finished 2-2.

I can see only two ways of avoiding VAR’s anticlimactic, celebration-dampening effect. Maybe, as time passes, the fans and the players will learn not to celebrate too early and will patiently await the VAR verdict. When that arrives, at a signal from the referee, one group of fans, the home or the visiting group, can celebrate.

Delayed climax? Without that thrill of spontaneous excitement? Fans just sitting there waiting for a signal to tell them whether they can leap into the air or tear up their season ticket? Is that likely? It sounds all wrong to me, almost a contradiction of what spectator sports are supposed to bring. But who knows?

A more straightforward way for VAR to at least get closer to a “Mr. Nice Guy” image would be for it to stop making calls based on millimetric measurements. Such calls cannot possibly come under the heading of “clear and obvious errors” -- supposedly a requirement for VAR intervention. The referee didn’t see these infractions because they were so slight.

With that thinking, two of my examples -- the “toe-nail” offside of Arsenal’s Montreal, and the “arm-brushing” handball of Man City’s Laporte -- would have been ignored. Two goals would have been allowed, exactly as they would have been by the field referee.

I much prefer this approach. VAR should not be making millimetric offside calls. This would also help to counter balance the pro-defense (and therefore anti-goal) bias that permeates the rules and current refereeing.

referees
24 comments about "A weekend with the VARmints".
Read more comments >
Next story loading