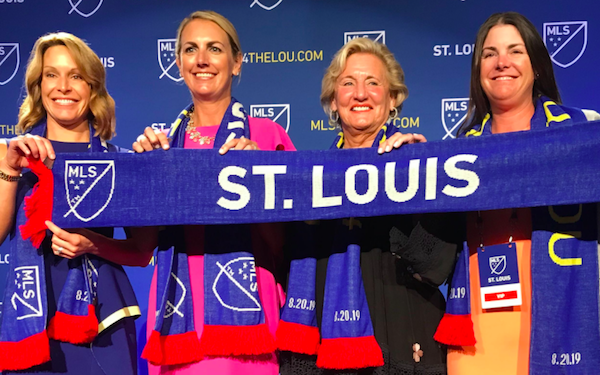 On Tuesday, a St. Louis team was introduced as MLS's 28th member, slated to begin in 2022 at a downtown stadium site on Market Street west of Union Station.

A previous expansion effort failed in 2017 when a bid to secure $60 million in public financing from a citywide sales tax for the stadium project was defeated in a city referendum. This time, the Taylors' expansion effort quickly picked up steam since they came forward last October with a plan for "overwhelming" private funding to cover the $250 million cost of the stadium.

"Our ownership group has come a long way since we first announced our bid last October at Mathews-Dickey Boys and Girls Club, and it's an incredible feeling to now be able to say, St. Louis is home to the first official majority female-led ownership group in MLS," said Kindle Betz, grandddaughter of Enterprise Rent-A-Car founder Jack Taylor. "Our MLS team and stadium will only add to St. Louis' renaissance currently underway and will provide us with a great opportunity to bring together many different segments of the community, uniting people in their love for the game."

The Taylor group will pay for the construction of the stadium, but the project proposal includes plenty of breaks. Among them ...

-- Free use of the land, currently owned by the Missouri Department of Transportation;
-- A sales tax exemption on stadium construction materials;
-- A 50 percent sales tax exemption on ticket taxes (and the revenues from the other 50 percent going toward stadium upgrades).
-- A 3 percent user-only sales tax surcharge on stadium goods going toward the stadium's operation and construction.

The St. Louis Board of Aldermen passed the resolution with tax incentives by 26-2 in November. Now, a formal agreement will have to be approved by the aldermen, and the team will have to get to work with finalizing a team name, colors and logo and start securing sponsorships.

In addition to the construction of the 22,500-seat stadium, the St. Louis group will have to pay MLS an expansion fee of $200 million and start-up costs related to the initial marketing of the team and building its roster and technical staff.