Adding up the U.S. women's strongest arguments for an improved contract

The U.S. women’s national team can make a great argument for a better contract. 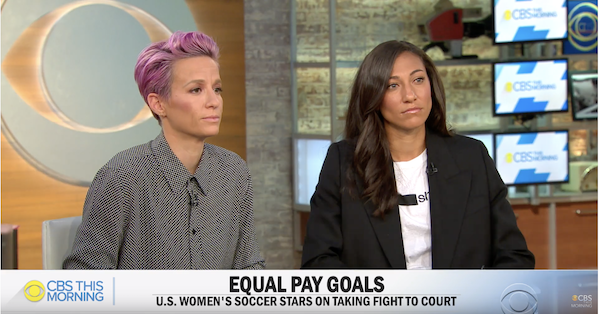 They can say there’s no substantive difference between a men’s friendly and a women’s friendly, and players should have the same base pay and bonuses for those games. They can say that in the absence of the tough but potentially lucrative World Cup qualifiers the men play, they should have bigger bonuses for the SheBelieves Cup and Tournament of Nations. They can argue that, given the difficulty they’ll face winning the World Cup in the future, they should have bonuses for advancing to the knockout round and quarterfinals.

But when we run the numbers, it’s hard to believe any of those things would be a stumbling block in a mediation process with U.S. Soccer.

So what else are the women asking for?

From U.S. Soccer’s point of view, the PR cost and the legal fees are surely more than they would pay under some of these scenarios, as run through my pay calculator.

Here’s how I ran this hypothetical:

Current compensation: Using all the available numbers from the current women’s collective bargaining agreement and specifically the per-game bonuses paid in 2019 and 2020, the women would make $36,042,676 over this representative six-year span.

Hypothetical - Equal friendlies: Non-salaried U.S. women’s players who’ve played at least seven games with the team earn $4,000 for making a gameday roster in 2019 and 2020. (It’s $500 less for less experienced players.) In my hypothetical, I’ve adjusted the women’s pay so that the per-game bonus for a non-salaried player ($4,000) plus the results bonus (X for a win vs. a top opponent, Y for a win vs. a second-tier opponent, Z for a loss, etc.) matches the bonus men would receive.

Hypothetical - World Cup bonuses for earlier rounds: These bonuses would be nice, especially as European teams get better and increase the odds of the USA taking an early exit, but they won’t affect this projection because the USA finished first in the World Cup in question. If, in future years, the women’s bonuses for earlier rounds equal 100% of the prize money from FIFA, the net effect on U.S. Soccer bottom line is nil.

Hypothetical - 100% of FIFA prize money for any World Cup finish: As it stands now, between the $2.53 million World Cup bonus and the $1.4 million for the Victory Tour, that’s 98.25% of the $4 million FIFA gives U.S. Soccer. If USSF gives all $4 million in bonus money and lands a sponsor for the Victory Tour, which seems to be no problem these days, that’s once again no impact on U.S. Soccer bottom line.

(There’s also an escalator clause in the CBA so that the women will be paid more if FIFA raises its prize money.)

We’ll pay women the same World Cup qualification results bonuses (as with friendlies, adjusted to incorporate the $4,000 per game bonus) as the men get for the pre-Hexagonal round.

Maybe they should get the same bonuses the men get for the Hexagonal, but Women’s World Cup qualifying is barely a blip in the schedule, and this hypothetical gives the WNT more for these games than they get for crowd-pleasing friendlies scattered across the country. It’s hard to say $15,625 is an underpayment for drubbing Trinidad & Tobago in front of 3,996 fans. (The men drew 19,188 to beat T&T at home in the 2017 Hex. We won’t speak of the away game.)

Surely none of this is keeping U.S. Soccer from shaking hands and proudly announcing a new deal.

So what could be?

In this hypothetical, I’ve left that money alone, and the result that’s plugged in is the 2016 quarterfinal exit. But another Olympic triumph would cost U.S. Soccer another seven-figure outlay. The federation has been willing to take that loss thus far, but do the women want more?

Let’s go all the way up to the men’s potential World Cup bonuses, bearing in mind that the elapsed men’s CBA would give the MNT barely two-thirds of the FIFA prize money if they somehow won. We’ll use the men’s group-stage points bonus and apply it to the 2015 Women’s World Cup, in which the women got seven points in the group stage.

Back pay: From the lawsuit, the women are asking for “(a)ll damages that the individual Plaintiffs and the class have sustained as a result of the USSF’s unlawful conduct including, but not limited to, back pay, front pay, general and special damages for lost compensation and job benefits that they would have received but for the discriminatory practices of the USSF.”

If the U.S. women are asking for every cent they would’ve received if they had signed the men’s CBA instead of their own, we would be talking about a ton of money. In an earlier calculation, I pegged the total from 2013-18 at more than $50 million. Imagine if they’re going back farther than that.

Yes, U.S. Soccer has a surplus. But that’s based in large part on a one-time windfall from hosting the men's Copa America Centenario, and the Federation has a lot of plans for that money and a lot of crumbling infrastructure on which to spend it. The U.S. women’s youth teams aren’t doing so well right now, so perhaps some of that money should go toward keeping the WNT competitive in future World Cups rather than simply handing everything to the current over-30 players who won’t be there.

In all likelihood, the women aren’t asking for the world. The women can see beyond themselves. They’re not out to rob future generations.

But I’ve been talking throughout this analysis about facts that aren’t in dispute. Each side can look at the CBAs and the published FIFA prize money, then do the same calculations I’m doing.

That may be the extent of the facts on which they agree. U.S. Soccer’s public barrage of numbers drew a quick, testy response from players (not players association) spokeswoman Molly Levinson, who called the numbers “utterly false” while disputing one matter of interpretation -- whether these numbers should include the players’ NWSL salaries. (My hypothetical does not, and yet the women get considerably more than the men unless the men make a strong World Cup run.)

This case will be decided by dueling accountants.

We can only hope it won’t be televised.