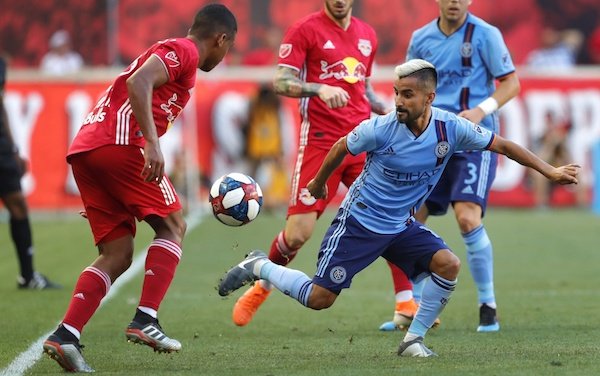 The MLS Rivalry Week is loaded with games with playoff implications, particularly in the Eastern Conference, where three different teams have a chance to finish the weekend in first place and 10 could be in the top seven.

MLS's Southeast series has been totally dominated by Atlanta United, which picked up its sixth win (to go along with two ties) when it beat the Lions, 2-0, in Orlando a week ago in the U.S. Open Cup semifinals.

NYCFC has a game in hand on Atlanta United and two on second-place Philadelphia so it's well positioned for the playoff push, but it will have to take care of business  against the Red Bulls, who have already won once this week on the road, beating D.C. United, 2-1.

A pair of Argentines, Taty Castellanos and Maxi Moralez, teamed up for the winner on Wednesday against Columbus. The goal was Castellanos' fifth in the last four games and 10th of the season while Moralez's assist was his MLS-leading 17th of the season.

The Union starts a tough homestand when they host D.C. United, followed by Atlanta United and LAFC, the two conference leaders. Having lost Wayne Rooney, red carded against the Red Bulls, D.C. United will be in defensive mode, just the posture that the Union has often struggled against.

The Revs' work under new coach Bruce Arena isn't finished. They've climbed all the way up from the basement to sixth place, but three teams sit a point behind. The Fire has been hot of late -- three wins in its last four games -- but has played the most games of the five teams battling right now for the final two playoff berths in the Eastern Conference.

TFC starts the weekend in ninth place but could be as high as sixth by the end of Saturday night. Montreal's hold on seventh place is precarious. It's 1-6-1 in its last eight games and blew a 3-0 lead against FC Dallas, settling for a 3-3 tie that cost French coach Remi Garde his job. The match will be the first with Wilmer Cabrera in charge.