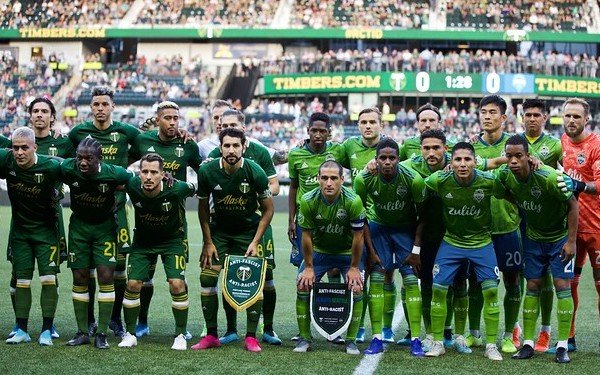 Portland's Providence Park was usually quiet on Friday night. First in protest, then in shock.

In a match that decided the Cascadia Cup, the Timbers fell to the rival Seattle Sounders, 2-1.

Portland only needed to tie to win the Pacific Northwest trophy but the struggling Sounders, winless in their last four games with 11 goals conceded, jumped out to a 2-0 lead on goals by Cristian Roldan and Raul Ruidiaz and rather convincingly held on for the confidence-boosting win.

The Sounders jumped from fifth place to second with the win and moved six points above the red line in the Western Conference playoff race. The Timbers would have overtaken the Sounders with a win.

But the match was followed intently by MLS watchers for what took place in the stands.

The Timbers Army, the Portland supporters' group, organized a protest against the MLS policy that bans the use of the the Iron Front symbol as a violation of its new policy prohibiting political signs and displays at matches.

Thanks to everyone for all of the encouragement and kind words on my first two-stick! To answer, the sketch is a combo of my drawing and stitching together some art I bought. #RCTID @timbersarmy #AUnitedFront #PORvSEA #PTFC pic.twitter.com/FhCedxno6O

Two Seattle supporters' groups joined in the silent protest in the first 33 minutes of the match, which aired on ESPN, where the derby is always one of the best-watched MLS matches on television.

The emblem of the Iron Front, an anti-Nazi paramilitary organization in Germany in the early 1930s, features three arrows pointing downward. The Iron Front was banned in 1933, hence the 33-minute protest. But MLS has banned the emblem on signs and displays in stadiums as political signage as part of a new fan policy instituted in 2019.

What protesters want. The Timbers Army, along with Rose City Riveters, the NWSL Thorns' supporters' group, and the Emerald City Supporters and Gorilla FC, both Seattle groups, issued a statement earlier in the week asking three things:

-- MLS rescind its ban on flying the iron front flag.
-- MLS remove the word “political” from its fan code of conduct as it is inherently arbitrary.
-- MLS work with international experts on human rights to craft language in the fan code of conduct that reflects and supports radical inclusion and anti-discrimination.

The protest -- no chants, no drums, no capos, no flags -- lasted until the end of the 33rd minute when Timbers Army fans started singing “Bella Ciao," an Italian protest song. Flags bearing the Iron Front emblem were visible in both Portland and Seattle sections. As they are permitted, fans wore shirts with Iron Front emblems on them, as did Timbers defender Zarek Valentin.

MLS's stance. Major League Soccer's view is the Iron Front symbol is political because it has been co-opted by Antifa, the collection of militant protest groups opposed to fascism and other extreme right-wing ideology. The league had been criticized and continues to be criticized for what groups considered the slow response to the presence of pro-Nazi ultras at Yankee Stadium, NYCFC's home.

The protest was organized after the Timbers issued a statement declaring their steadfast opposition to fascism but supporting the MLS policy banning the Iron Front symbol, which Portland fans displayed without issue in previous years at home games. Before Friday's match, both teams posed with pennants saying "anti-fascism, anti-racism" (photo).

The ban on "political" statements or images on banners or flags is unique to MLS among U.S. pro sports leagues. Fans of teams in other U.S. pro teams generally don't display flags or tifos in the stands like soccer fans do, and MLS's most passionate fans are generally younger, hipper, more urban, more diverse -- and more politically active.

Paulson's statement. After the game, Merritt Paulson, the Portland Timbers owner, issued a statement to the Oregonian's Jamie Goldberg, saying he gets and appreciates the issue the Timbers Army has with MLS and the Timbers "care deeply about human rights causes, like fighting racism and fascism -- just like our supporters do." But he added, "I was upset about the game and I don't believe a silent supporters section helps our home-field advantage. The idea I am driven by money is farcical. I am fortunate to have some with or without the Timbers. But I do care about our team winning and I like to think our supporters - who are the best in the country. "

The country's political issues won't go away, nor will the opposition to MLS's stance on political displays.

Friday's game was the fourth game of the Timbers' unprecedented 10-game homestand. Portland in seventh place in the Western Conference but will drop below the playoff line if FC Dallas wins or ties on Sunday.

How Portland fans mobilize over the next six weeks at Providence Park will be watched as closely as how the Timbers perform in their drive to the playoffs.