Another colossal VAR gaffe in England

This is what the current FIFA rulebook, pp. 101-102, has to say:
A direct free kick is awarded if a player commits any of the following offenses: [one of which is ...]
• impedes an opponent with contact.

Clear enough? I would have thought so. But apparently not clear enough for English referees. During Sunday’s EPL game between Tottenham and Newcastle, two of them -- Mike Dean on the field, and Anthony Taylor from his VAR vantage point -- were presented with a crystal clear example of “impeding with contact” -- really, couldn’t have been clearer -- and both of them turned it down. So the stadium’s big screen came alight with yet another negative, anti-goal VAR triumph: NO PENALTY.

This is what happened in the 78th minute. Tottenham’s Harry Kane received the ball deep in the Newcastle penalty area. Newcastle’s Jamaal Lascelles trailed him, and trying to draw level appeared to stumble or to trip himself up. Whatever, as Kane was about to shoot, Lascelles went full-length to ground, his body lurching forward -- and across the path of Kane. There was plenty of contact between Lascelles’s falling body, all 6-foot-2 of it, and Kane’s legs. Kane went down too.

Lascelles’s fall looked to be accidental. But that is irrelevant. The fact of contact is all that matters. It does not have to intentional for the foul to be called.

No room for doubt here. A clear penalty. Possibly, referee Mike Dean, behind the play, did not get a clear view. Possibly. But no excuses are available for VAR Anthony Taylor. It is quite inexplicable how Taylor, after looking at replays, could confirm Dean’s error. But confirm it he did. Keith Hackett, formerly the head referee in England, now writing for The Telegraph, called the decision “absolutely amazing.”

How could this happen? An emotional game, for sure. Here was Newcastle, massive underdog at Tottenham, leading 1-0 late in the game, defending desperately -- and successfully -- as Tottenham dominated possession. But referees usually do a good job at resisting that sort of pressure.

For an explanation, I don’t think we need look further than the traditional pro-defense bias of English referees. This was a call based on the judgment of two English referees -- this was not technology making the decision, no millimetric measuring was involved. 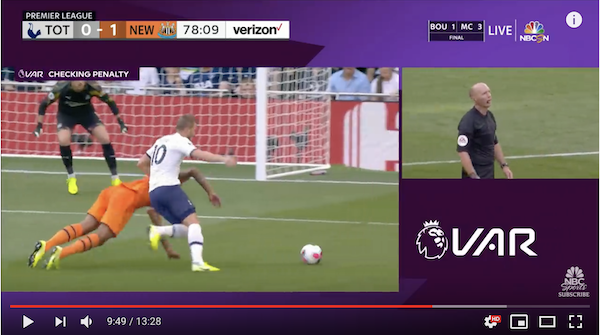 Tottenham’s coach, Mauricio Pochettino, later said he still had faith in VAR, despite this obviously wrong call. Good to hear, because the error, the glaring error, in this case is mostly one of human fallibility.

But VAR does not emerge unblemished. The VAR checks the referee decision. But who checks the VAR decision? Quis custodiet ipsos custodes? Who watches the watchmen? The VAR verdict is put forward as a super-verdict, based on careful scrutiny of a bunch of replays. All the more reason to make sure it’s correct.

Actually, VAR does incorporate a final check. That occurs when the referee trots across to the field monitor to get his first look at the replays.

We arrive at the most bewildering aspect of this whole incident. Referee Mike Dean never looked at the replays. How so? Because, in the EPL version of VAR, use of the field-side monitor is discouraged.

Whether that is a good idea (it certainly makes a major cause of delay much less likely) is not the point here. What needs to be explained is why the EPL is allowed to have its own version of VAR, why it is allowed to make a unilateral decision about which facets of the system it will employ, which it will not.

There surely needs to be a universal set of VAR rules and regulations that should an integral part of the official FIFA rules. Compliance to those rules must be compulsory. Permitting different versions of VAR to flourish is a sure way to create confusion. It is very much in VAR’s own interest to avoid obviously absurd calls like this one.

Yet the EPL has informed the world that its very own version of VAR will not be used to check on goalkeeper movement at penalty kicks, and that use of the field monitor is discouraged.

IFAB is the body that should lay down the necessary rules. But IFAB has never been known for celerity. I imagine the case will be made for treating VAR as a work-in-progress, so the more experimental versions the better.

But that haphazard approach won’t wash. VAR has been around for several years now and a great deal of trial-and-error has been carried out. Anyway, the system has already been used officially, non-experimentally, at the top level, in the World Cup. The rules for its use should, by now, be clearly delineated. Wherever it is in operation, the same rules must be used.

FOOTNOTE: Defenders in the EPL must now know that they do not need to make that desperate, dangerous, last-ditch tackle in their own penalty area. As the opponent prepares to take his shot on goal, all the defender has to do is to stumble and fall, making sure he makes some contact with the opponent’s legs, enough to bring him down. Under the Mike Dean view of things, and with a VAR seal of approval from Anthony Taylor, that will not qualify as “impeding an opponent with contact,” so all is well. The big screen has the final say: “NO PENALTY.”