In the clash between the four-time World Cup-winner and a team that has never been to the World Cup, the USA scored a few minutes after kickoff and cruised to a 4-0 win over Portugal in front of the largest crowd ever to watch a U.S. women's stand-alone friendly game. All four U.S. goals came from inside the goal area. 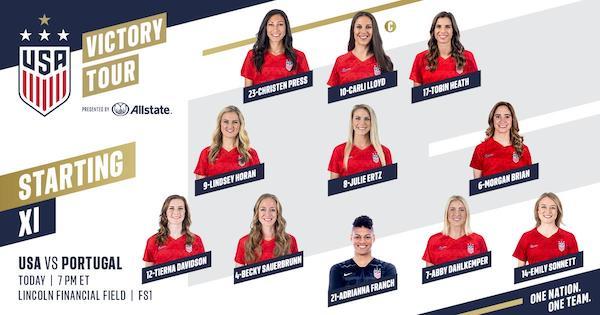 USA Player Ratings
(1=low; 5=middle; 10=high.)
GOALKEEPER
Portugal's two shots on target consisted of a long-range effort in the first half and a weak short-range shot in the second -- both straight at Adrianna Franch, who earned her second cap since debuting last March in a 2-2 tie with England

DEFENDERS
Portugal's tame when not invisible offense enabled the U.S. outside backs to focus on attack. Unfortunately, Tierna Davidson never found her groove on the left side, sending more passes to the foes than to teammates. On the right side, Emily Sonnett failed to mesh with Morgan Brian and Tobin Heath. Abby Dahlkemper hit a few excellent passes out of the back while patrolling the center and defending far upfield with Becky Sauerbrunn.

MIDFIELDERS
Julie Ertz's fine passing included cross-field chips to Christen Press and Carli Lloyd in the buildup to the first and third goals. Ertz's effectiveness on the ball far exceeded that of her teammates, who gave it away with frustrating frequency in the first half. Fortunately for the USA, it was very easy to win the ball back from the Portuguese. Lindsey Horan roamed the midfield diligently but her aim was off and rarely did her passes connect. In the 44th minute, unmarked eight yards out, she scuffed the ball straight to goalkeeper Patricia Morais. Early in the second half, Horan did win an aerial battle with two Portuguese defenders and nodded the ball on for Carli Lloyd to finish and make it 3-0. And Horan's hustle contributed much to Portugal's inability to progress out of the midfield. Morgan Brian scored the USA's second goal from a Press corner kick. That Brian stooped to score on a header from inside goal area shows how poorly Portugal marked up.

FORWARDS
Tobin Heath pounced on Christen Press' low driven cross to stab in the first goal in the fourth minute from three yards. Press, who also assisted on the second goal with a corner kick, had a goal called back for a hand ball and shot weakly, wide and hit the post as she failed to get a goal of her own. Carli Lloyd, after her close-range finish, hit the cross that Allie Long met with a diving header to make it 4-0. Lloyd whiffed on a close-range chance in the 69th minute.

SUBSTITUTES
Jessica McDonald, who hit the post in the 68th minute and set up Lloyd for a chance she squandered, was the most dynamic of the subs. Plus, her long throw-in helped set up Lloyd's goal. Crystal Dunn sent a couple long-range shots wide. Mallory Pugh set up two shots for Press. Allie Long did well to anticipate Lloyd's cross and head home the fourth goal.

TRIVIA: The 49,504 fans at Lincoln Field in Philadelphia exceeded the previous largest crowd for a U.S. women's stand-alone friendly: 44,028 fans at Heinz Field in Pittsburgh for a 8-0 U.S. win over Costa Rica in August 2015.