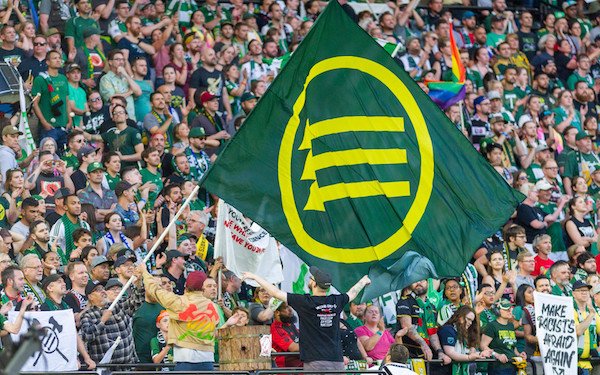 In the aftermath of the protest by fans at Friday's Portland Timbers-Seattle Sounders derby over MLS's ban on Iron Front flag and banners inside stadiums, board members from the 107 Independent Supporters Trust representing Portland supporters' groups met with representatives of the Timbers and the NWSL Thorns on Tuesday.

Afterwards, the 107IST issued a statement. Here are some of key points:

-- No sanctions will be levied against individuals who flew or held up Iron Front flags or banners at Providence Park during last Friday’s Cascadia Cup match or at the Thorns' NWSL match on Sunday. (The clubs issued general warnings.)

-- MLS has committed to meeting with 107IST representatives to discuss the league's Fan Code of Conduct and concerns with the inclusion of the word “political” in the 2019 version and the banning of the Iron Front symbol.

The 107IST described the discussions as "productive" and is "encouraged by the commitment of the Timbers/Thorns front office and the league to work with us on finding a path to move forward." It reiterated, however, its position, which remains unchanged. It wants MLS to ...

1. Lift the ban on the display of iron front imagery on flags and banners;
2. Remove the word “political” from the fan code of conduct; and
3. Consult with marginalized groups and experts in the field of human rights to construct a fan code of conduct that supports radical inclusion and opposes discrimination.