'Identification players' defined by character, not where they come from

Just over a decade ago, while I was working for a soccer website in Washington, D.C., a writer sent in a piece saying that D.C. United's latest signing from South America was a poor move. Not because the striker in question wasn't a good player (he went on to win the MLS Golden Boot that season), but because he was part of a mixed squad with few players that D.C. fans could identify with. I disagreed with the premise, but it was a well-argued article worth publishing.

Two summers ago, Eintracht Frankfurt defender Bastian Oczipka left the team after five years to sign for Schalke 04. Oczipka wasn't a local player, but he was a German national who'd been around for a comparatively long time, and -- although not good enough for the German national team -- was known as a 'heart-and-soul' player who gave his all. A lot of Frankfurt fans lamented the loss of yet another 'identification player.'

Both D.C. and Eintracht, like all serious professional clubs, have youth team setups designed to nurture the talents of tomorrow, but a young local player breaking into his side's first team and staying there has become an increasing rarity. The Celtic FC team that won the European Cup in 1967 with a team of Scots all born within a 30-mile radius of Glasgow is now a historical curiosity that will not be repeated in my lifetime. The thrilling Manchester United side of the 1990s that won multiple Premier League trophies and became European champion with the core of its former youth team (Phil and Gary Neville, Ryan Giggs, Paul Scholes, Nicky Butt and David Beckham) was probably the last of its kind in England.

Soccer fans, though, have shown themselves to be remarkably adaptable when it comes to idolizing players. In truth, it no longer matters where players come from if they show up in a city and make a credible attempt to integrate, and then play with enough energy and commitment to justify the considerable wages they're taking in return.

This past Sunday I was in the stadium watching Eintracht Frankfurt's home game with Fortuna Düsseldorf. Last season the home fans had thrilled to the 'magic triangle' of Luka Jovic (Serbian, gone this summer to Real Madrid), Sebastien Haller (French, now at West Ham United) and Croatian World Cup runner-up Ante Rebic (likely off today to AC Milan). At halftime the team was deservedly trailing 0-1, but then subbed in its brand new signing, Dutch forward Bas Dost, who took 12 minutes to score his first goal for the club. 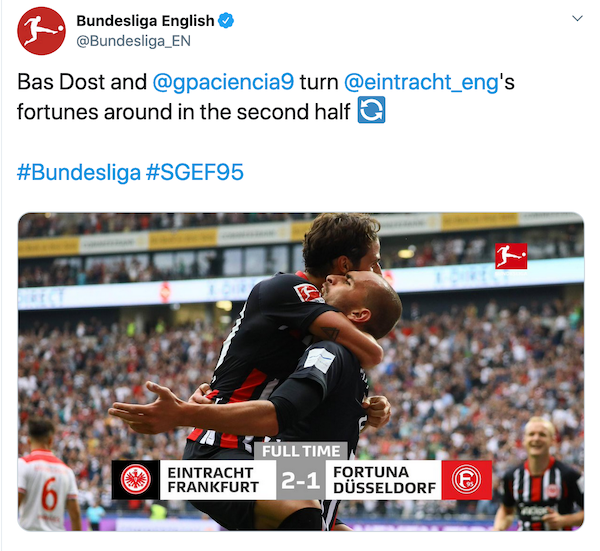 Do the fans 'identify' with Bas Dost yet? Not entirely, but he's already on the right path. He's declared that he's very happy to be in town, that Frankfurt was his target club, and that he "expects" to score many goals for the team. He speaks German. And he helped turn a poor performance around into a 2-1 victory. Eintracht has already moved on, just like Jovic, Haller and Rebic. When fans get jilted they don't mope for long, but start swiping through the transfer market's equivalent of Tinder instead.

There are no obvious up-and-coming strikers in Eintracht's youth system. Luca Waldschmidt was on the verge of stepping up a couple of years ago, but was never really given a proper chance before being sold to SC Freiburg. This past summer he scored seven goals for the German U-21s at the European Championship, and has just been called up to the full national team. The only other locals under contract -- Marc Stendera, Jan Zimmermann, Marco Russ and Timothy Chandler -- are all fringe players who, with the exception of Stendera, are reaching the end of their careers and have had spells at other clubs in between.

The regrettably premature release of Waldschmidt and the lack of regional input does not, though, prevent Frankfurt fans from heavily 'identifying' with their current squad (including two Japanese, a French-Malian, an Argentine, a Portuguese, a Spaniard, three Serbs etc.), thanks to a successful two years when they have lifted the German Cup (2018, beating Bayern Munich 3-1), and reached the semifinals of the Europa League (eliminated by Chelsea on penalty kicks last May). Take, for example, Austrian defender Martin Hinteregger, who was picked up on loan from Augsburg last winter when he fell out with his coach there. He was signed to a full contract this summer after rapidly becoming a cult hero among Eintracht fans.

How did this happen? Hinteregger has character. He's big and ugly and prone to the odd defensive error, but his tackles often send opponents flying and he never holds back on the field. He likes to state what he thinks (thus his falling-out with Augsburg), he occasionally barrels forward on unfeasible runs, and when he missed the decisive penalty against Chelsea, he tearfully fell into the arms of adoring Eintracht fans who had forgiven him in a matter of seconds. That's love. Inexplicable, but magnificent. Video footage of him staggeringly drunk over the summer break only enhanced Hinteregger's reputation as 'one of us.'

Meanwhile, one of the world's supposedly top-five greatest players has spent the summer trying to get out of Paris. Part of Neymar's plan to force a move back to Barcelona was to insult the team he's played for the past two years, Paris Saint-Germain, and every last one of its followers. The most memorable moment of his career, he said in July, came while beating PSG when he was playing for Barcelona in the Champions League. Talent's all very well, but among fans it won't count for anything if you don't have class.

germany, spain
7 comments about "'Identification players' defined by character, not where they come from".
Read more comments >
Next story loading