Carli Lloyd struck twice in the first half and Lindsey Horan capped the scoring in the second half for a 3-0 U.S. win over Portugal. Despite not matching the four goals it scored in last Thursday's shutout win over Portugal, the USA, which hit the crossbar three times on Tuesday, gave a more polished performance overall. The only remarkable difference in Portuguese play was they fouled twice as much as they did on Tuesday. One of their 12 fouls gave the USA the penalty kick that Lloyd finished to make it 2-0. 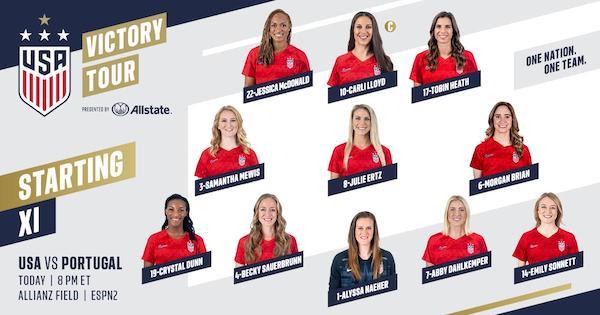 USA Player Ratings
(1=low; 5=middle; 10=high.)
GOALKEEPER
The USA could have won this game without using a goalkeeper. Portugal managed one shot and it didn't come close enough to the goal to require a save from Alyssa Naeher.

DEFENDERS
The ineptitude of Portugal's offense is almost painful to watch, but the U.S. defense does deserve some credit for creating such a magnificent mismatch. The Portuguese did beat Sweden 2-1 last January. Besides tackling crisply and intercepting passes on the few occasions when the U.S. midfield hadn't already won the ball, the passing by Abby Dahlkemper, especially, and Co., kept the Portuguese chasing in vain and sparked attacks. The usually much more aggressive Crystal Dunn didn't attack that much. But it wasn't necessary. Emily Sonnett took part in buildup to the 1-0 goal.

MIDFIELDERS
The consistent play of Julie Ertz, defensively and going forward, continues to be a great strength for this U.S. team. Sam Mewis forced a good diving save from goalkeeper Ines Pereira in the 28th minute. Morgan Brian shot high and wide twice late in the second half.

FORWARDS
Carli Lloyd troubled the Portuguese throughout the game and got the USA on the board from a close-range after Pereira parried a shot from Jessica McDonald, who should have scored when her first-half header from two yards hit the crossbar, a feat she repeated in the second half from six yards. The Portuguese resorted to fouls to stop Tobin Heath but the third time did so in the a penalty area, setting up Lloyd's goal from the mark.

SUBSTITUTES
Lindsey Horan took over the playmaker's after coming on at halftime for Ertz, who moved to the backline. After a searing shot off the crossbar and one that went too high, Horan scored on a header from Christen Press' corner kick. Press, also a halftime sub, forced a decent save in the 50th minute after latching on to a Lloyd pass. Tierna Davidson played much better after coming on at halftime than she did as a starter on Thursday when her passes mostly went askew. Mallory Pugh set up a Horan shot but her play lacked spark. Kristen Hamilton became the USA's first debutant of 2019.

TRIVIA 1: Jill Ellis is now tied with Tony DiCicco for most wins by a women's U.S. national team coach.
TRIVIA 2: Portugal has failed to score against the USA while losing all nine games between the two teams.