The Qatar 2022 World Cup organizers went all out -- well, as much as they can these days -- with the unveiling of the logo for the next World Cup.

The logo's white emblem is set against a maroon background -- the color of the Qatari national flag -- in the design of a winter shawl -- for the first winter World Cup in the Northern Hemisphere -- with a unbroken loop depicting a figure eight -- for the eight stadiums of the 2022 World Cup -- and infinity -- for what organizers termed the “interconnected nature” of the World Cup. 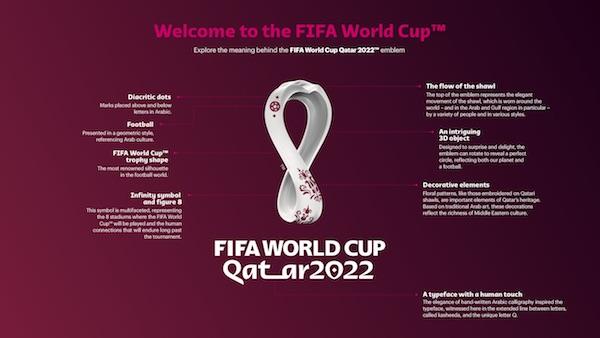 But this World Cup's connections are complicated.

In Doha, Qatar's capital, the "FIFA World Cup Qatar 2022" logo was projected at 8:22 p.m. -- 20:22 -- on to the facade of the National Archives in the Msheireb district, where the crowd was treated to a procession of soldiers on horseback, and at the Al Zubarah Fort, an historic Qatari military fortress that serves as a museum.

The logo was also displayed at Times Square in New York, train stations in Paris and Rio de Janeiro and the Arch of Peace in Milan.

There were unveilings at 10 sites in Turkey, and in Kuwait, Lebanon, Jordan and Iraq. But there were no ceremonies in the United Arab Emirates, Saudi Arabia and Egypt, which have boycotted Qatar economically and diplomatically since 2017.

The heavy promotion in Turkey reflects the close ties it has developed with Qatar, which uses it to get around the effects of the boycott.