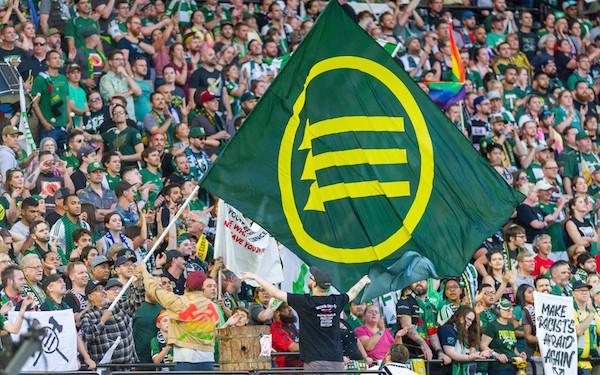 In response to a three-game ban on an undetermined number of Portland Timbers fans from attending MLS games at Providence Park, the 107 Independent Supporters Trust -- which encompasses the Timbers Army and Rose City Riveters, who support the NWSL Thorns -- will stage a protest at Saturday's MLS match against Sporting KC.

The protest won't be like the silent treatment the Timbers Army gave the Timbers for the match against archrival Seattle on Aug. 23, but they won't fly any flags or deploy smoke during goal celebrations to protest the ban issued to fans who waved flags with the Iron Front symbol at last Saturday's game against Real Salt Lake.

"Our focus this weekend will be on education," said the 107IST. "We will use banners with words instead of symbols to remind the world of our unwavering opposition to fascism and to discrimination. We will increase our written communication, both inside the stadium and online, about the reasons for our protest and the larger issues that the Iron Front flag ban represents. We will continue to fight for the League to lift the bans for individuals who displayed Iron Front flags and banners on Aug. 31."

Fans had waived Iron Front flags after the silent protest ended after the 33rd minute of the Sounders match but were only issued general warnings.

The emblem of the Iron Front, an anti-Nazi paramilitary organization in Germany in the early 1930s, features three arrows pointing downward. Fans consider it an expression of anti-fascism and anti-racism.

MLS's new Fan Code of Conduct bans the display of political flags, and its position is the Iron Front emblem is political because it has been co-opted by Antifa, the collection of militant protest groups opposed to fascism and other extreme right-wing ideology.

For their part, the Timbers said they were encouraged that MLS will soon be engaging with the 107IST on the issues addressed. They said they supported "explicit and creative anti-fascist and anti-racist expression" but noted they (and all other MLS teams) need to enforce league rules like the current Fan Code of Conduct.