USA-Mexico: A learning experience, suggesting El Tri is a lot more than 'slightly ahead' 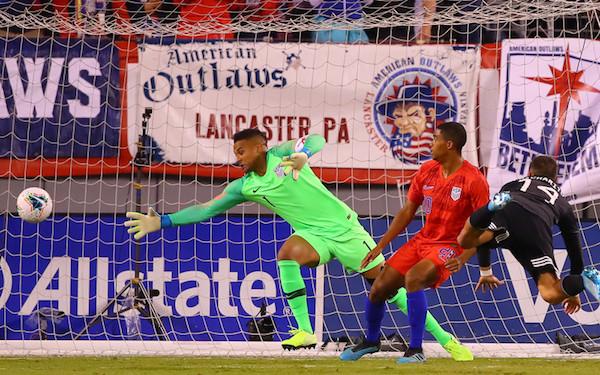 If you were Sergino Dest and you sat in your hotel room Friday afternoon and watched the Netherlands beat Germany, 4-2, in Euro 2020 qualifying with a starting right back you're already competing equally with at Ajax and then you had to endure a drubbing at the hands of Mexico in your senior U.S. debut, which team might you be leaning to commit your international future to?

That's a sobering thought on a night when there was little positive to say about Mexico's 3-0 victory over the USA before a pro-Mexico crowd of 47,960 at MetLife Stadium in East Rutherford, New Jersey.

“You guys are going to think I’m crazy," he said after the game. "I’m happier about this game than the Gold Cup final." He was referring to the final two months earlier when Mexico beat the USA, 1-0.  “We’re making progress," he added, acknowledging that was not going to be the narrative in the media.

Different not necessarily better. Berhalter's point was the USA at least tried to play the ball out of the back instead of resorting to playing long balls over the top. A laudatory experiment but one that seemed doomed.

Goalkeeper Zack Steffen had his worst game in a U.S. uniform, and with John Brooks a late scratch, neither center back, Aaron Long nor Walker Zimmerman, looked comfortable on the ball. With the exception of Dest, the defense repeatedly looked incapable of playing its way out of a proverbial paper bag.

Berhalter said he wanted a "different performance" from his players than the one he saw in the Gold Cup final -- "Today I saw guys that at least continually wanted to try to keep playing," he said -- but it wasn't necessarily better. The play out of the back often looked forced and stilted, rarely confident. And like in Chicago in July, coordination on both sides of the ball faded under pressure from the Mexicans.

Playing with fear. Christian Pulisic started out confidently but his frustration grew as the match went along. When it came time for the USA to take a penalty kick in the 88th minute with the score 3-0, Pulisic handed the ball to 19-year-old Josh Sargent, who fired the ball right at the diving Jonathan Orozco, who guessed correctly and saved the attempt.

Almost two years into the youth movement that followed its elimination from the 2018 World Cup, the USA again lacked poise without veterans Michael Bradley and Jozy Altidore in the lineup. Both played in the Gold Cup but were unavailable because of commitments with Toronto FC, which has MLS games scheduled for Saturday and Wednesday. (One of the lessons of 2019 has to be that MLS has to once and for all shut down during FIFA windows -- for its sake and the sake of the national team, no exceptions.)

"We still play with fear against them," said Pulisic, "and that is what I can't really live with. That needs to change."

Fear wasn't the issue with Dest in his debut at the age of 18. He started out confidently enough on the ball and drove forward, hitting the USA's best chance until the game was out of reach. But he was megged by Tecatito Corona on the play that led to the first goal in the 21st minute and largely disappeared from the attack after that.

In the 68th minute, Berhalter pulled Dest, probably seeing that Chucky Lozano was about to come on for Corona. (A wise move as it turned out.) The U.S. coach praised his 18-year-old left back, saying he played like an older player.

“Did he make some mistakes? Yeah, of course,” Berhalter said. “But I can’t be more proud of a guy who goes out and tries to do things."

Berhalter knows the USA-Mexico rivalry well, having played against El Tri four times, including the memorable 2-0 win in the 2002 World Cup. In his second USA-Mexico game as coach, he downplayed the revenge aspect, preferring to look at the game as a learning experience, an opportunity to see what the adjustments that could be made, and admitting that based on the Gold Cup Mexico was "slightly ahead" of the USA.

Friday's game was certainly a learning experience, suggesting that Mexico is a lot more than "slightly ahead" of the USA.