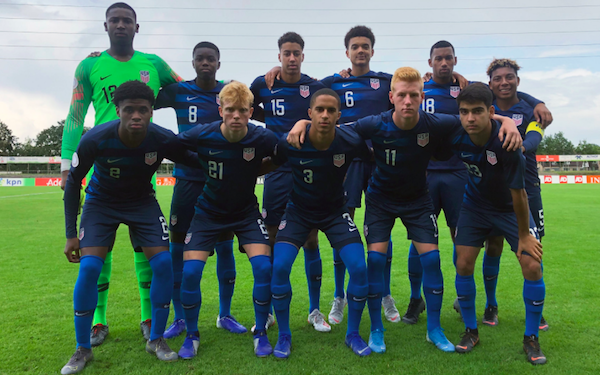 The USA won its second game at a four-nations under-17 tournament in the Netherlands when it beat the host country, 3-1, on Saturday.

The USA, a 2-1 winner over Mexico in its opening game, and the Netherlands, the two-time reigning European under-17 champion, both fielded mostly reserves. They will meet Nov. 2 in their third and final group game at the Under-17 World Cup in Brazil.

Kobe Hernandez, one of only two U.S. starters from the opening game, gave the USA an early lead, while late goals from Andres Jasson and Gilbert Fuentes allowed the USA to pull ahead for the 3-1.

Nice win over the host nation

Naoufal Bannis, the only Dutch starter from the opening win over Denmark to start against the USA, had a chance to give the Oranje the lead in the ninth minute, but Chituru Odunze, the USA's 6-foot-7 keeper who recently signed with Leicester City, dove to his right and stopped the shot.

Against the run of play, Jasson was taken down for a penalty in the 19th minute, and Hernandez converted for the 1-0 U.S. lead. The Dutch had lots of chances, but they couldn't beat Odunze until Allouch equalized in the 71st minute.

The USA recovered, though, and won on goals by Jasson and Fuentes after the Dutch were unable to clear balls out of danger.

They had four players named to the 2019 U-17 UEFA Best XI team -- keeper Calvin Raatsie and midfielder Sontje Hansen, who both play for Ajax, Hoffenfeim's Melayro Bogarde, nephew of former Dutch international defender Winston Bogarde, and Liverpool's Ki-Jana Hoever -- but all were rested on Saturday.

Two of the top Dutch U-17s aren't with the team. Ryan Gravenberch is playing up with the Dutch U-19s and Ajax teammate Brian Brobbey is injured.

Next up: The USA will face Denmark on Monday. The tournament serves as the USA’s final international matches before it heads to Brazil in late October.