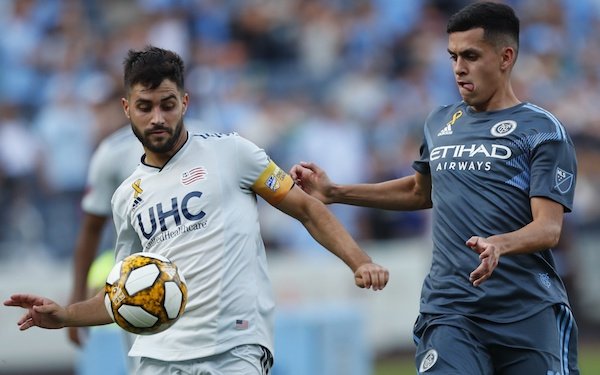 The battle in recent weeks has been between the Philadelphia Union and defending MLS champion Atlanta United for the top spot in the Eastern Conference, but New York City FC has surged ahead, rallying from a goal down to win, 2-1, on a goal late in stoppage time.

NYCFC is now two points ahead of the Union with a chance to make it five points when it hosts Toronto FC on Wednesday.

Injuries and international call-ups forced NYCFC coach Dome Torrent to make four changes in the starting lineup from the team beat Vancouver, 3-1, a week ago to clinch a playoff berth. NYCFC possibly lost top scorer Heber (14 goals in 20 games) for the rest of the regular season with a quad injury.

Revs jumped out to a 1-0 lead after two minutes on a goal by Luis Caicedo but they lost Antonio Delamea to a red card five minutes later and had to defend with 10 players for the last 83 minutes.

New England has been excellent on the road since Bruce Arena took charge and looked to have escaped from Yankee Stadium with at least a point, thanks in large part due to goalkeeper Matt Turner, who recorded a career-high nine saves.

But Jesus Medina came off the bench with 30 minutes remaining and scored twice to complete the comeback and give NYCFC its fifth straight win, a club record.

The goals were the second and third of the season for Medina, who has played only 14 games (just four starts) in 2019 after starting most of the 2018 season.

“I’m very happy," said Torrent, "especially for Jesus because before the game I said you have to be ready against New England.”

Elsewhere ... Toronto FC moved ahead of the Revs into sixth place with a 5-1 win at FC Cincinnati. Orlando City's playoff chances took a hit when it could only manage a 2-2 tie at home against LAFC. It remains in ninth place four points below the playoff line.

Portland climbed above the playoff line in the Western Conference with a dramatic 2-1 win over Sporting KC, getting goals from Jeremy Ebobisse in the 83rd minute and Brian Fernandez in the fourth minute of stoppage time.

Sporting KC could have pulled even with the Timbers with a win but now looks to miss out on the playoffs, barring a miracle, for the first time since it changed its name from the Wizards after the 2010 season.

Portland's win puts pressure on the LA Galaxy, which dropped to eighth place. The Galaxy has a game in hand on seventh-place FC Dallas and will need a win or tie on Wednesday at much-improved Colorado to move back into the top seven.

Only four points separate the seven teams below LAFC in the Western Conference.

Elsewhere ... Missing 10 first-team players away on international duty, Seattle missed a chance to solidify its hold on second place when it fell at Colorado, 2-0. Rookie Andre Shinyashiki scored his sixth and seventh goals of the season for the Rapids, who won their second straight game under new head coach Robin Fraser and are 9-5-4 in their last 18 games.