U.S. U-20 men start new cycle with pair of wins

The next generation of U.S. U-20s started their two-year cycle, which culminates with 2021 U-20 World Cup, by beating Croatia, 2-1, and the UAE U-23s, 3-0, in Rogaska Slatina, Slovenia. Tab Ramos, who has coached the USA at the last four U-20 World Cups, took a 22-player roster that included two players, goalkeeper David Ochoa and winger Konrad de la Fuente, who started for the USA at the 2019 U-20 World Cup, at which the USA reached the quarterfinals for a third straight time. 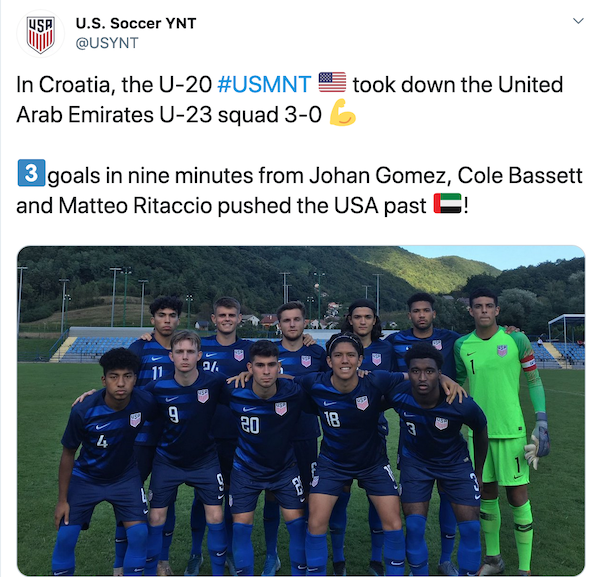 Against a Zagreb selection, the USA got its goals from Cole Bassett, who has already played 23 MLS games (with two goals) in two seasons for the Colorado Rapids, and Cameron Harper, who played for Southern California's Patadores before heading to Scotland, where he plays for Celtic's reserves.

The scorers against the UAE were: Johan Gomez, a longtime FC Dallas player who is now with Porto's U-19s, Bassett, and Matteo Ritaccio, a former BW Gottschee now with Liverpool's academy.