Not a victory, but a 1-1 comeback tie with Uruguay following Friday's stinging 3-0 loss to Mexico ends the latest Gregg Berhalter camp on a relatively positive note. Although Uruguay is never an easy foe, its counterattack approach -- it beat Costa Rica 2-1 on Friday with only 42% percent of the possession -- made Tuesday's task for the USA much less harrowing than against an El Tri team that challenged each buildup on Friday. 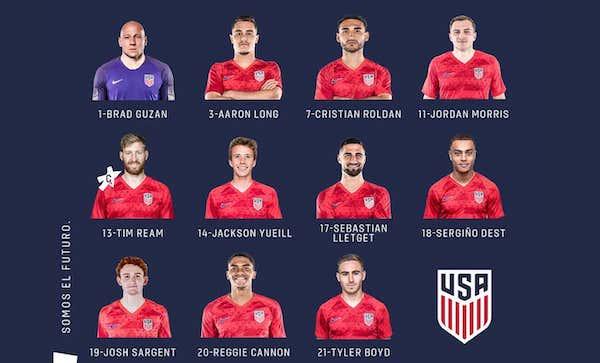 Brad Guzan badly bobbled a cross to gift Matias Vecino Uruguay's best chance of the first half but was saved by Tim Ream, who blocked the close-range shot.

In addition to blocking Vecino's goal-bound close-range shot, central defender Tim Ream intervened with several Uruguayan through balls, stopped Brian Rodriguez from scoring a second with tackle near the goal, and passed dependably, as in the buildup to the USA's tying goal. His central partner Aaron Long got spun around by Rodriguez's moves on Uruguay's goal -- but full-speed Rodriguez looked unstoppable. Right back Reggie Cannon was in the opposing penalty area when Uruguay's counterattack started there and he ran out of gas during his long retreat. Left back Sergino Dest held up defensively besides getting roasted once by the brilliant Rodriguez, and took the USA's best shot of the day, a 23-yard effort well saved by Fernando Muslera. Unlike on Friday against Mexico, Uruguay gave U.S. defenders plenty of cushion to leisurely bring the ball upfield. Uruguay only had 41% of the possession, but outshot the USA 15-11.

Sebastian Lletget's passing was inconsistent but his cross, after a feed from Jordan Morris, in the 11th minute set up Cristian Roldan for a point-blank header, which was saved by Muslera. Roldan helped set up the U.S. goal. Jackson Yueill hit nice cross-field passes to Jordan Morris but also hit two horrendous corner kicks. The U.S. looked determined to attack down the wings with its outside backs while the midfielders seemed uninterested in going down the middle.

Tyler Boyd managed to send the ball over the crossbar from three yards after Jordan Morris served in the perfect low pass from the wing. Boyd also mis-hit a pass so badly when he tried to feed a midfielder from the wing that it set up a Uruguay counterattack. He left after 65 minutes with two missed shots, two offside and one foul committed. Morris' attacks, from the left wing, caused Uruguay the most problems. He met the ball well but didn't get enough force on a 48th-minute diving header. He was rewarded for his persistence when a deflected ball looped for him to score the equalizer off his chest. Had Muslera mot stopped Dest's shot, Josh Sargent  would be celebrating a fine assist. He kept possession well under pressure and should have been sought out far more by his teammates. Morris' cross to Boyd should have taught the Americans that driven low balls from the wing are more lethal than high ones, but instead they kept lofting the kind of crosses that Uruguayan defenders are expert at dealing with.

Young defender Miles Robinson held up well during the final 10 minutes when the Uruguayans added urgency to their attack. The biggest impact off the bench came from Nick Lima. His foray down the right resulted in a fortuitous deflection off his arm (no VAR for this game) to Morris' chest for tying goal. The 19-year-old Paxton Pomykal came on for his USA debut in the 85th minute.

TRIVIA. Jordan Morris scored his sixth career goal for the USA and his first since he hit the gamewinner against Jamaica in the 2017 Concacaf Gold Cup.