It sounds like FIFA came up with a terrific idea. It’s what American youth clubs have long hoped for: some financial compensation for developing players who make it to the highest levels.

To recognize the contributions of clubs at which Women’s World Cup players were developed and currently play, FIFA would after the tournament in France divide $8.48 million among these clubs, part of the $50 million in moneys it committed to paying out.

The clubs at which players spent their formative years (ages 12 to 22) would receive a Training Club Reward from FIFA. That could mean as much as an estimated $10,350 for an American youth club that helped spawn a player who reached the 2019 Women’s World Cup.

But the U.S. clubs never got a chance to fill out the Club Application Form FIFA required to determine their eligibility for funds.

On May 14, 2019, FIFA sent a letter to the federations that included a Player Club History Form, which was to be returned by the federation by June 1 with the club history data of each player.

The May 14 letter included instructions to the federation to forward the Club Application Form to the clubs where the players trained from age 12 to 22. A request that is repeated later in the document. The club is instructed to complete the Player History Form and e-mail it to FIFA by July 10, 2019.

Earlier this week, the attorney Lance Reich, who has represented American youth clubs in their quest for solidarity payments and training compensation, checked with some youth clubs that are eligible for the Training Club Reward and was told they had not been forwarded the Club Application Form by U.S. Soccer, and that they were not aware of the FIFA WWC 2019 Club Benefits Program.

Soccer America checked with the De Anza Force (Tierna Davidson), MVLA (Abby Dahlkemper), PDA (Tobin Heath), Prince William Soccer (Ali Krieger), Slammers FC (Christen Press) and Real Colorado (Mallory Pugh). Each director said he had not received the application from U.S. Soccer and was unaware of the program. Included in those queried was Mike Cullina, the Executive Director of Prince William Soccer, who is also U.S. Club Soccer’s chairman. He’s been on U.S. Soccer's Board of Directors since March of 2019. His response on Sept. 12 was: “I am unaware of such a program.”

Walid Khoury, the director of Southern California's Slammers FC, for whom Press played seven years, said, “I’m shocked that the federation never let us know about this.”

Asked why U.S. Soccer didn’t forward the Club Application Forms to the youth clubs, a U.S. Soccer spokesman said on Sept. 12, “We are in communication with FIFA about the process.” He added that U.S. Soccer believed it necessary to get full clarification and full understanding from FIFA on how best to proceed. 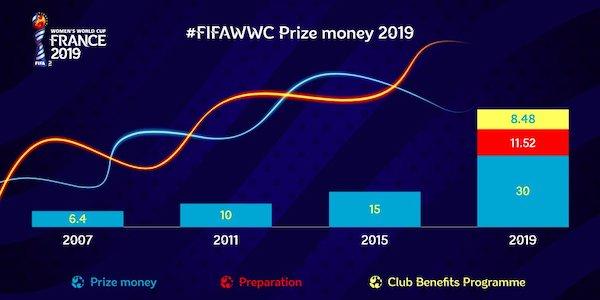 The amount in FIFA's Club Benefits Program will be divided 50/50  -- one half of the money to a player’s current club -- the releasing club reward -- and the other half -- the training club reward -- to the clubs where she “spent her formative years between the ages of 12 to 22.”

U.S. Soccer confirmed that it forwarded the Club Application Forms to NWSL teams.

The amounts within each pot will be divided according to a formula based on how many days a player participated in the Women's World Cup. As the finalists, the players from the USA and Netherlands earned the most money for their clubs, approximately $20,700 per player split evenly between the releasing club and training club(s).

The NWSL released a list of 58 players from its nine clubs who went to the Women's World Cup -- not just U.S. players but the many players from national teams like Australia and Canada that stacked their squads with NWSL players. Using FIFA's formula for compensating releasing clubs, NWSL clubs will share an estimated $478,575.

In this regard, the program is similar to the program FIFA had to reward men's clubs for the participation of their players in the 2018 World Cup, only there was a lot more money involved: $209 million. (Ten MLS clubs shared $3,737,722.50 in rewards.)

But FIFA added a wrinkle with the training club rewards. Soccer America identified 44 Women's World Cup players who played for U.S. youth clubs -- all 23 U.S. players plus 15 Jamaican players and six others on five different teams. Using FIFA's formula for compensating training clubs, these youth clubs could share an estimated $374,175. This would mark a new direction for FIFA, which doesn't authorize training compensation in women's soccer and administers minuscule solidarity payments to women's clubs because there's not much of a market yet for women's transfer fees.

To collect on former players who represented other national teams, U.S. youth clubs would need the other federations to list the U.S. clubs in the Player Club History Form. But without U.S. Soccer alerting them, the U.S. clubs wouldn't have known to make sure they were included.

One concern of youth directors once they became aware of the program was that the professional (NWSL) clubs might receive funds and the youth clubs would not. U.S. Soccer’s spokesman says U.S. Soccer has not yet received funds from FIFA -- it's the federation's responsibility to distribute the funds -- and that it is in discussion with FIFA to determine the process.

The deadlines have passed, but perhaps American youth clubs will still receive the Training Club Rewards. In the meantime, U.S. Soccer could have sent — before, at or even after the July 10 deadline ... a message to members, "As you may be aware, FIFA has started a new Club Benefits Program rewarding clubs for their work in training players who participated in the Women's World Cup. We are working with FIFA on determining what is required. Please be assured we will make sure you are allowed to submit claims so you are properly rewarded.”

The best case scenario will be if the youth clubs ultimately receive the funds, U.S. Soccer improves how it communicates with its youth clubs, and that it regains their confidence.